Number of isomers in a 3-sugar oligosaccharide

I recently read that 12288 different oligosaccharides can be formed from the D-isomers of glucose, mannose and galactose. I wanted to try to calculate this, but I keep falling very short of this number.

Each molecule has the potential to form 6 unique bonds:

The disaccharide can form 13 unique bonds:

(Note, bonds formed by anomeric carbons shown with an arrow)

So, if a monosaccharide can form 6 different bonds, this means that:

Each of these disaccharides has 13 possible bonds it can make to a third saccharide:

This is probably a counting error. But maybe I am missing a stereocenter?

This question is interesting and neglected. Bob made a sensible attempt at solving the problem. I took a different approach. [The number of isomers 12,288 was found in Stryer’s Biochemistry (Google: stryer 12288 isomers)]. Of course, oligo- means a few. I presume this means three in this case. But can D-glucose, D-galactose and D-mannose be used as many times as you want? That would mean 27 (33 = 27) permutations which would eventually make the total much greater than 12,288. However, if each hexose is to be used once, then six (6! = 6 factorial) permutations are possible for the location of the hexoses in the oligosaccharide. Division of 12,288 by 6 removes this issue from the question and leaves 2,048 as the number to justify. Now 2048 = 211. The problem reduces to finding 11 stereocenters, if possible!

Let us assume as a point of departure that diagramatic structure ABC (top of the illustration; The connectivity C1-C4 is arbitrary.) shows where bonds are formed between the C1 anomeric carbons and the hydroxyls at C2, C3, C4 and C6 of another hexose. Another pair of assumptions is that all rings are 6-membered (pyranose) and that all hexoses, as defined, are in the D-series. Finally, assume for the time being that there are no C1-O-C1 connections as typified in figs. D and E.

Rather than define C1 of hexose A as having two stereocenters (α and β anomers), this assignment will be considered in a different way. Hexose A is given a value of zero because no attachments may be made at its hydroxyl groups at C2, C3, C4 and C6. Hexose B has four hydroxyl groups (blue dots) that can form two anomeric, glycosidic bonds at C1 with hexose A. The AB connection creates 24 (16) stereoisomers. In a similar fashion the hydroxyls at C2, C3, C4 and C6 of hexose C (red dots) form another 16 stereoisomers with C1 of hexose B. The total count thus far is 3! x 28 = 6 x 256 = 1536. This result is only one-eightth of the goal of 12,288 or short by a factor of 23. To this point the eight hydroxyl groups considered can only form two configurations each.

If the original analysis considered a structure such as ABC having a mutarotating C1-OH, then the total might be 12,288. However, ABC is a connectivity map, not a chemical structure.

What may be concluded from all of this? The premises set down here may not be those applied by the proposers of 12,288. There may be a flaw in this, or their, analysis. The answer may be 12,288, 24,576 or something else. 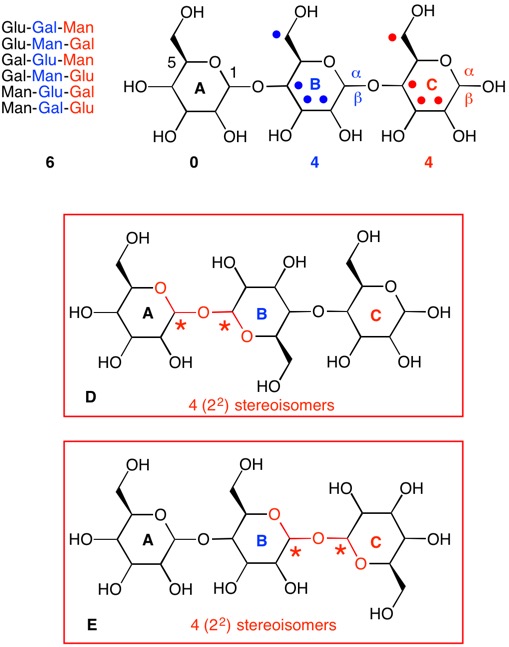 Not the answer you're looking for? Browse other questions tagged stereochemistry isomers or ask your own question.