Wouldn't radiolabelled phosphorus in DNA break it apart as it disintegrates?

The Hershey-Chase experiment was designed to prove that DNA is the genetic material in organisms. In this experiment, two batches of viruses were grown in two separate media A and B, with A having an abundance of nutrients involving $\ce{^32_15P}$, and B having a lot of $\ce{^35_16S}$.

This process releases $\pu{1.709 MeV}$ of energy, which is quite sufficient to break apart the phosphodiester linkages. 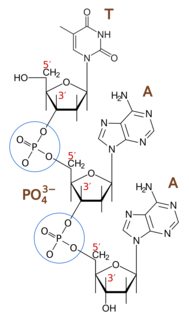 With all the phosphorus in the viral DNA being radiolabelled, this would very well break apart all the phosphodiester linkages. and give us a soup of sulfur-based nucleosides. In such a case, how come this hasn't affected the virus' mechanism to transfer the DNA to a host cell?

Of course it would break, just like you said; also, a high-energy $\beta$ particle would kill quite a lot of bystander molecules. Also, if not for other reason, the resulting molecule would no longer be DNA , since the decayed atom would no longer be $\rm P$. Also, the product would no longer be radioactive, so we wouldn't be able to detect it anyway.

The same applies to any other case of radiolabeling, in biochemistry or elsewhere, and you seem to be missing the very point of it: All this is not important.

Say, we have some $\ce{A + B -> C + D}$, and we label some atom in $\ce{A}$ so as to find out whether it will go to $\ce{C}$ or to $\ce{D}$. Then we run the reaction as usual. Now, radioactive atoms do not decay all at once; some decay earlier and some later. Those which decay earlier (that is, before and during the reaction) are lost to us, and we don't care about them one bit. Then we separate $\ce{C}$ from $\ce{D}$ and measure the radioactivity of each, and it is those atoms which decay now that matter.

Oh, and it is not like we label all atoms in $\ce{A}$. No, a very tiny fraction would suffice. Those viruses would probably get but a few radioactive atoms each. Some will be lucky enough to reproduce. Some will be killed by an early decay and remembered as martyrs of science.

Why the disintegration of $\ce{^32_15P}$ does not affect the experiment. Following reasons:

Why this disintegration not affects the virus' mechanism to transfer the DNA to a host cell ?

Consider a phage which has undergone such disintegration. If the phage(virus) survives and somehow can still replicate its genetic material it can continue to act on bacteria. But nobody knows what happens !

If it dies, then when centrifugation is done it either be sticking to the bacteria or be in the broth(culture solution). Then either it can go with bacteria or be separated as lower weight fraction. This might skew the result a little though !

In this work, before releasing phage on bacteria initial separation of phages for labelling was done.

The $\ce{^35_16S}$ is a stable species and can only affect the numerical accuracy of this experiment by < 12% by the maximal disintegration as discussed above.

Not the answer you're looking for? Browse other questions tagged biochemistry energy radioactivity dna-rna or ask your own question.

4
Predicting 260/280 of DNA or RNA from sequence?
9
Why is DNA negatively charged and what makes it so?
7
What is palindromic DNA?
3
How do biochemists seperate nucleotides from DNA to add to the PCR
1
Why does a larger DNA gel box require a higher voltage to move DNA at the same speed?
2
DNA-Sequencing (detection of the change of pH-value) after emulsion PCR
5
Theory behind Experiment: Extraction and Identification of DNA