I want to convert the sulfate ions to sulfur trioxide by using $\ce{V^5+}$ ions...

Could this be possible? And if so, would it be $\ce{SO3}$ that is formed, or other sulfur oxides? 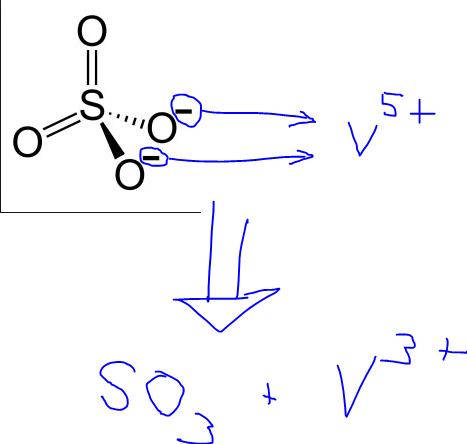 Also, the reaction mechanism you have drawn is not a dehydration, but a reduction of the sulfate. That would not form sulfur trioxide, but a reduced sulfur compound, such as sulfite. Sulfur dioxide gas evaporation from above sulfite salts is probably more favored than sulfur trioxide evaporation, but that isn't saying much. Either one is still highly disfavored under neutral or alkaline pH.

4
What do the half-reactions need to be for balancing a redox reaction in an acidic medium?
2
Ionic bond and ionic radii in FeS
19
Why is an ionic bond a chemical and not a physical bond?
2
Calculating the electrons an atom wants to gain/lose to reach a noble gas
1
About combining a cation and an anion
1
Difficulty understanding redox in terms of hydrogen and oxygen transfer?
6
Is ionic charge just a label?
6
Formal charges on polyatomic ions