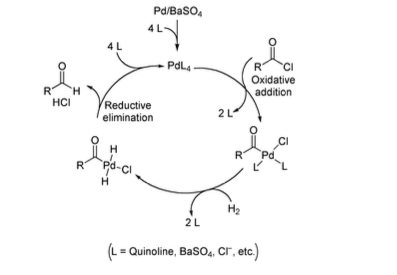 33
Why can't Pd/C and H2 reduce both the alkene and carbonyl portions of α,β-unsaturated carbonyls?

20
Why does NaBH4 reduce double bonds conjugated to carbonyl groups, while LiAlH4 does not?
1
Synthesis of 1-hexene from 1-octyne
3
Hydrogenation at atmospheric pressure in amateur environment
9
How can a ketone be enantioselectively reduced, in the presence of an ester?
33
Why can't Pd/C and H2 reduce both the alkene and carbonyl portions of α,β-unsaturated carbonyls?
7
Why does the reduction of a Weinreb amide give an aldehyde instead of an amine?
5
Is the product of Lindlar hydrogenation of (2Z,4S)-4-methylhept-2-en-5-yne optically active?
9
Photochemical reduction of benzophenone: why inverted flask?