How does electrolytic conduction depends on the size of ions & their solvation?

The smaller the effective size of the ion after solvation, the greater will be its conducting power."

But, on the Internet, it is explained as follows:

Radius decreases, smaller ions carrying current in small area, more associations with anions & due to this, the ions become heavy & they move with reduced speed as compared to less associated ones, & thus conductivity decreases.

The explanation is different to the what the book says. Could someone please explain this?

However, water molecules are not as free as the molecules of a gas. Water has a much higher viscosity, for instance. So think of water as a loose gel. A large (unsolvated, or poorly solvated) ion has an easier time slipping between gaps in this gel. A smaller, more highly solvated ion is, by definition, more tightly bound to the gel network, and moves more sluggishly, as if it has to carry more of the network with it. This approach is more explanatory than predictive (see figure). 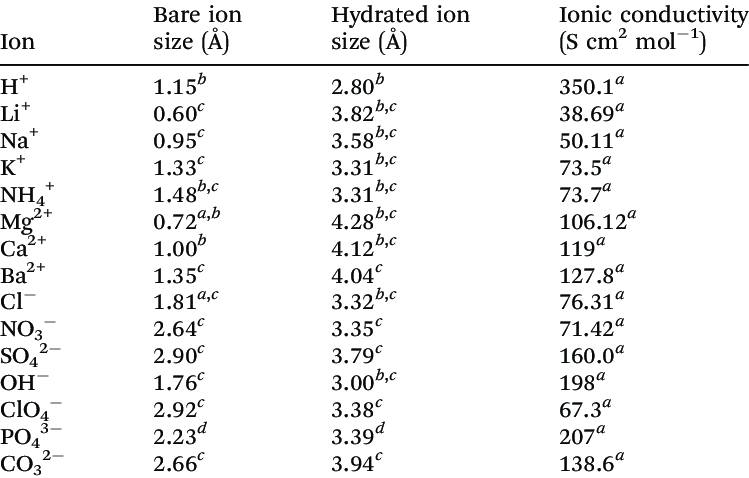 The thing can be explained as: whenever a small sized ion(particularly it's actual ionic size but not after solvation) is solvated it's effective radius increases and hence due to the increased size of the ion the space required for each ion is now lesser than what it had earlier. Hence, it can be said so conducting power changes inversely with the effective radius after solvation( as more solvated ion conducts less as compared to the less solvated).

And according to your writing both the references are correct as internet said about "conductivity and not about conducting power". So don't get confused between them.

16
How does conductivity work for non-redoxed ions?
8
Why does decreasing the distance between the electrodes in an electrolytic cell increase the rate of electroplating?
2
If you run an electrolytic cell long enough, does the conductivity decrease?
0
Why does Area of Interface depends on size of particles?
0
How to apply Faraday's law to calculate the charge of metal ions?
1
Is the cathode and anode on the cell notation of an Electrolytic cell on the same side as if how you will write it for a Galvanic cell?
0
How does electrolytic conductance depend on solvation?