I routinely run COSY spectra to help with assignment of my proton NMR.

The experiment is fast to run and generally useful, however some of the intermediates I've recently been making have had sufficiently small coupling constants that the COSY hasn't been terribly useful in certain regions(a 'standard' COSY isn't giving the resolution needed).

Typically, I get around this by running a set of HMBC and edited-HSQC, which allows me to trace the protons along the molecule, in a similar way as I'd be able to do with the COSY. The issue with this is that with the quantity of material I have, the HMBC takes significant amounts of time to run, making this method unhelpful for day-to-day work.

A colleague suggested using 2D-TOCSY to see which protons are in the same spin systems (not the same information as in the COSY, but would give me what I need).

Looking through the ever useful Claridge, it seems that the mixing pulse from the COSY gets replaced with a 'spin lock' sequence. What is less clear to me from this though, is whether TOCSY is also dependant on the magnitude of the coupling (i.e. if the J values are minimal, will the TOCSY suffer from the same issues as the COSY), or whether the spin systems are detected indirectly/through some other property. 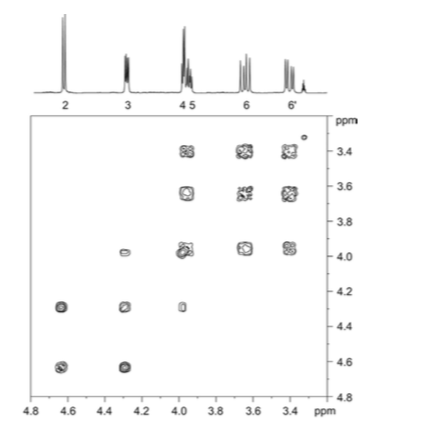 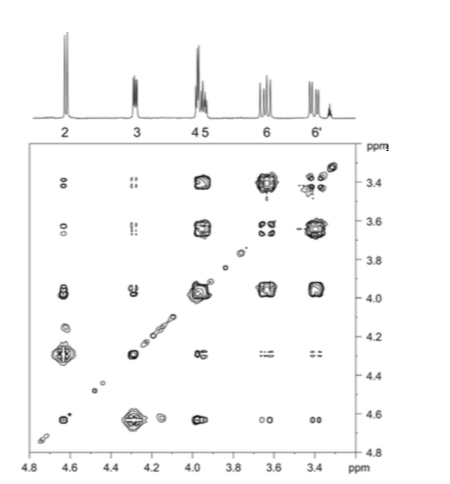 The TOCSY transfer also depends on the size of the J coupling, you don't get around that.

Generally speaking it is found that cross peaks due to direct coupling build up to their maximum intensity in a time which is of the order of $1/(2J)$. Peaks which arise from transfer through two successive couplings take longer to build up, and if three successive couplings are involved, even longer mixing times are needed

The TOCSY has the advantage of creating in-phase signals instead of the anti-phase signals of the COSY, which increases sensitivity. But that doesn't mean that it is generally more sensitive.

Whether or not the overall intensity of the COSY or TOCSY cross peaks is greater depends intimately on the choice of the experimental parameters and on the molecule being studied. However, the general experience is that for small to medium-sized molecules, COSY is the preferred experiment for detecting small couplings.

I'm not sure if you can get a general answer for your case, you might have to directly compare the experiments for the kind of molecule you want to look at. You could also try longer mixing times for the TOCSY and see if they help with your small couplings (which they should, as long as relaxation doesn't eat up that advantage).

Magnetisation transfer in a TOCSY experiment occurs via a different mechanism than for COSY. The spinlock generates an oscillatory exchange of coherence between spins that is propagated thoughout the coupling network. The efficiency of the spinlock transfer depends on a number of parameters; molecular conformation and topology which effects the coupling constants, and relaxation rates across the spin network being the most important. So, yes, signal does depend on the size of the coupling, but occurs via a different mechanism.

Once the spins are brought into the transverse plane through a standard excitation 90 and allowed to evolve during t1 period (as per a COSY), they are 'locked' into position using low cw power, or usually by a composite pulse train. Those signals that are in-phase following the evolution period are aligned with, and locked to, the transverse axis, effectively removing the influence of the primary magnetic field, Bo. The spin frequencies are now proportional to this new spinlock field, which is very small compared to Bo (so the chemical shifts are effectively all the same, because chemical shifts/transition energies are proportional to the strength of magnetic field), and so all of the spins are strongly coupled and this allows efficient mixing of magnetisation fur the duration of the mixing period. This is called isotropic mixing.

Typical values for spinlocks range from about 30ms-120ms. There is no hard and fast rule for predicting the optimum mixing time. Magnetisation transfer ocurs faster between spins with large coupling constants, so only 2,3J couplings will be seen with short mixing times. There are various rules of thumb used for selecting the appropriate mixing time. You can use 1/(10JHH) where JHH is the coupling across these transfer steps. A typical JHH is about 7Hz, so to see a 5 step transfer you might choose a mixing time of:

Another guestimate is that around 15ms will give you results similar to a COSY, and you can add 15ms for each transfer step, which will give you something like:

I would usually suggest values of 40-70ms as a good starting point. For larger molecules, you will lose signal through relaxation with longer mixing times. Also, longer mixing times give wider distribution of magnetisation, which means an overall reduction in total signal-to-noise

It is not uncommon for research samples to record 2 TOCSY experiments using different mixing times; one short and one longer.

A TOCSY is not necessarily a solution to a system that contains small or vanishing couplings (not weak, as you suggest). The TOCSY experiment still requires coupling to exist along the spin system, and it is the break in the spin-coupled pathway that halts the distribution of magnetisation that allows individual spin systems to be identified.

5
How to predict a COSY NMR spectra for an AMX spin system?
12
Why is proton coupling through bonds and how does this affect identical protons?
3
Spin spin coupling in a proton NMR of an ester?
4
Shifting of axial and equatorial protons
2
H-NMR Equivalent Protons and Coupling of Glycerol
7
Non-uniform sampling (NUS) in 2D-NMR
2
Comparison of chemical shift of methyl group attached to alcohol and carboxylic acid
4
NMR magnetically equivalent protons for a 1,4-disubstituted benzene ring
7
Product operator analysis for CHn groups in HSQC and HMQC