What is the point group of hexachloridotitanate(III)?

I found the answer to this question to be $D_\mathrm{3h}$ but I am not convinced. Can someone explain me with a diagram if possible and explain why it doesn't belong to the octahedral point group $O_\mathrm{h}$?

coordination-compounds symmetry
Share
Improve this question
edited May 31 '17 at 14:42

Getting straight to the point, I believe whichever reference you have that claims $D_\mathrm{3h}$ is incorrect.

Titanium(III) complexes were the first example presented in my coordination chemistry class to examine the energy difference between the $\mathrm{t_{2g}}$ and $\mathrm{e_g}$ orbitals, explain why it exists and where the colour of coordination compounds derives from including carefully examining the UV spectrum of titanium(III). Our lecturer, Professor Klüfers of the LMU Munich, explained that the hexaaquacomplex is practically octahedral in shape. However, there is not just a clean absorption band but rather a band with a shoulder. This is because the excited state of $\ce{[Ti(H2O)6]^3+}$ is Jahn–Teller distorted, having an uneven $\mathrm{e_g}$ population, meaning that two slightly different excitation energies exist.

One might go a step further and argue that even in the ground state a certain distortion should exist. If one were to pull (not push) the ligands in $z$-direction slightly closer to the central metal, this would destabilise any orbitals with $z$ contribution meaning that $\mathrm d_{xy}$ suddenly becomes the single most stable d orbital. This slight distortion which one might call anti-Jahn–Teller (since it is opposite to the classic Jahn–Teller distortion) could explain a reduction of symmetry from $O_\mathrm{h}$ to $D_{\mathrm{4h}}$.

$D_\mathrm{3h}$ symmetry is not consistent with octahedraloid coordination spheres at all. It is very common for pentacoordinated centres such as $\ce{PF5}$. The only way to have six ligands — as in hexachloridotitanate(III) — around a central metal in this point group would be a trigonal prism. That would be a very uncommon coordination sphere and I am sure I would have heard of it in the context of titanium(III) in said course above should it exist for this species. Indeed, the source orthocresol found and linked in the comments makes no mention of any distorted geometry at all:

The low-temperature structure results from rotations of the $\ce{[TiCl6]^3-}$ octahedra around a 4-fold axis. (Emphasis and square brackets mine) 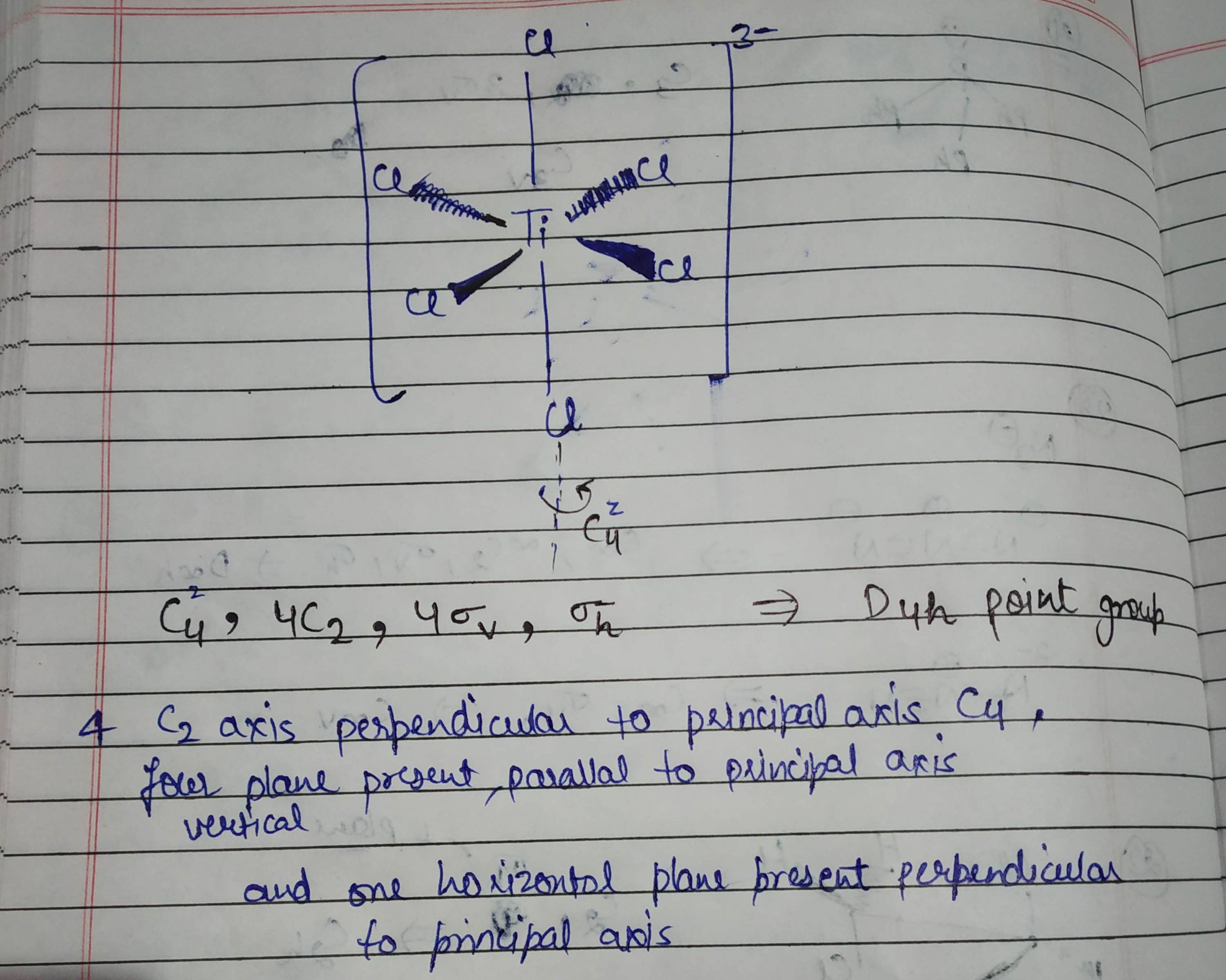 Not the answer you're looking for? Browse other questions tagged coordination-compounds symmetry or ask your own question.

10
How do I find the ground state term symbol for transition metal complexes?
8
Identifying the C3, C4, S4, and S6 symmetry operations in the Oh point group
6
Symmetry and SALC: choosing coordinate basis
9
Why are the t2 orbitals above the e orbitals in a tetrahedral complex using the crystal field theory?
5
Why are there no dihedral mirror planes in the D3h point group?
5
Vibronic coupling: How do I determine the new point group after vibration?
4
C4v point group complexes and the group orbitals (MO Theory)
13
Relationship between the symmetry number of a molecule as used in rotational spectroscopy and point group
1
Point group from mono to bulk MoS2
3
Character table and symmetry operations