Prediction of products in reaction of dicarbonyl with alpha-haloketone

Following is the question that was asked in my exam. a,b,c,d are the various options, one of which is the answer. I am familiar with the Reformatsky reaction, Aldol condensation, Knoevenagel's reaction and general base catalysed carbonyl reaction. 1 and 2 are my attempts at deriving the mechanism and hence getting at the products. But none of those succeeded to bring about the required products.

I need help in how to proceed through in this case and derive the products. 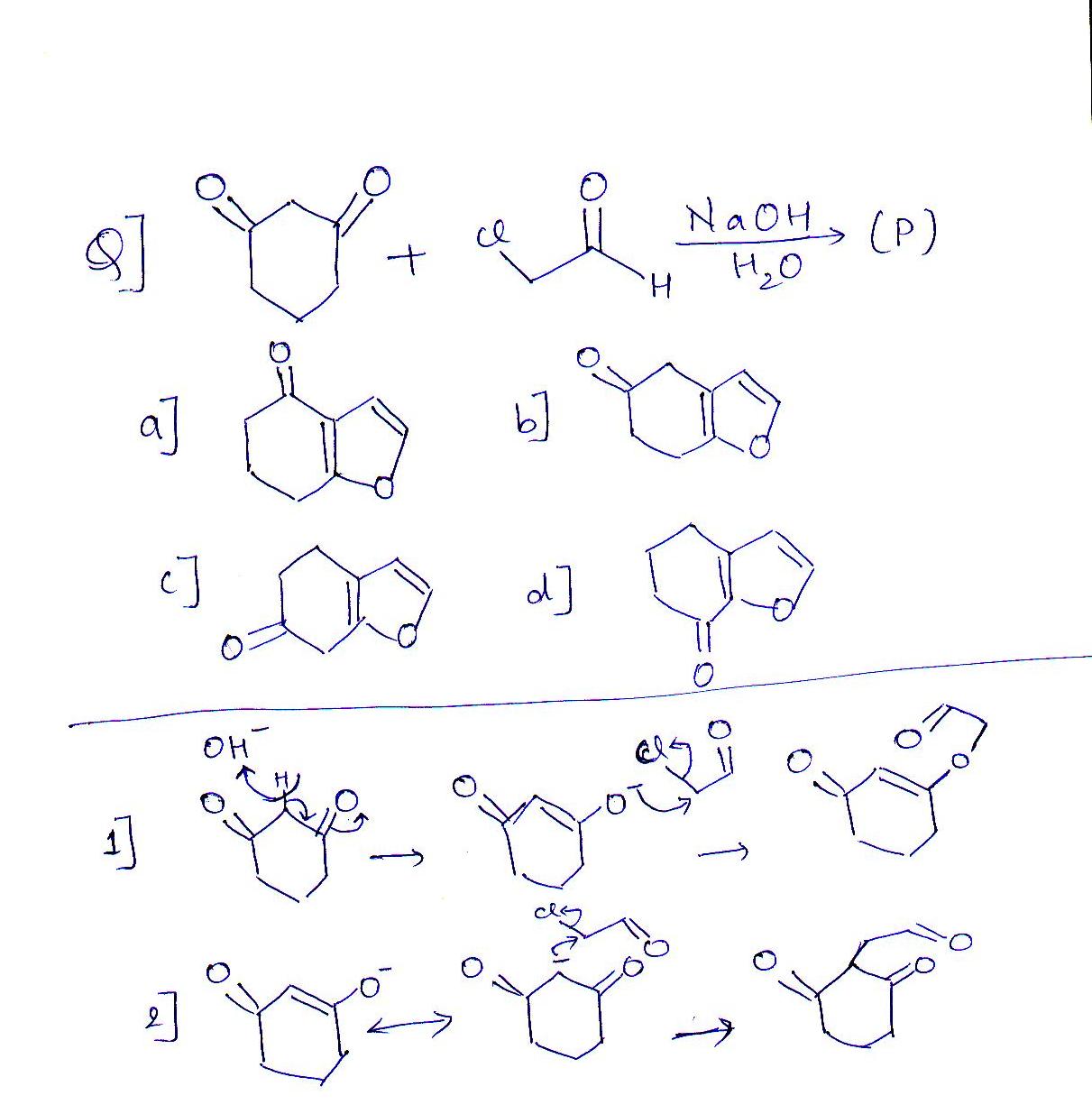 As you've already figured out, cyclohexane-1,3-dione is more acidic than chloroacetaldehyde, the pKa of the diketone in water should be around 5.3. The enolate of 1 (sorry for the circle in the structure, i'm to lazy to fix it) and 2 undergo an aldol reaction yielding 3. With a bit of charge shifting, we get again a nicely stabilized enolate (4), which dehalogenates (you might call that an O-alkylation as well) to 5. Subsequent elimination under aqueous conditions results in the formation of 6. I'd say this is, more or less, an example of the Feist-Bénary reaction. 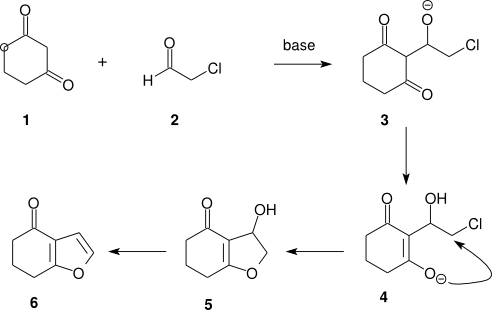 Btw, I created the drawings with BKChem.

A conceivable depiction for the "transformation" of 3 to 4 is given below, but please note that this is just a model to please our eyes and minds ;)

Klaus Warzecha has already provided the correct mechanism, but I'd like to offer a supplementary discussion.

One approach here would be to attempt to eliminate some of the options based simply on first principles. Choices (b) and (c) seem improbable prima facie for reasons of thermodynamics: the carbonyl moiety is not conjugated to the aromatic furan ring, so these should be intrinsically less stable.

Structure (b) has an additional problem, which is that the position of the ether linkage is para- to the remaining carbonyl. A similar problem occurs in structure (d), except in that case the ether linkage is ortho- to the carbonyl moiety. Finding plausible mechanisms that would lead to either of those regiochemical outcomes is difficult. The greater acidity of the 1,3-cyclohexanedione makes it the likelier enolate nucleophile, whereas the 2-chloroacetaldehyde is the likelier electrophile. This means that the oxygens of the original 1,3-cyclohexanedione should remain in place, not undergoing elimination, so they should maintain a meta- relationship.

At the conclusion of that analysis, only (a) survives as the correct choice. The mechanism is fairly rote, and has already been given. The only subtle question, to my mind, is which site on the enolate reacts with which site on the electrophile (i.e., does the carbon of the enolate add to the the carbonyl, or does it substitute the chlorine?); either mechanism can lead to the same product. The enolate carbon is the softer nucleophilic site and should prefer the softer electrophile. Fleming, in his book Molecular Orbitals and Organic Chemical Reactions, provides a table of the absolute hardness, $\eta$, of various Lewis acids. Acetaldehyde is given to be considerably softer than chloromethane. Assuming it's valid to compare those two molecules as a proxy for this reaction, it seems probable that the enolate will attack the carbonyl from the carbon, while the chlorine will be displaced in an SN2 attack by the oxygen. Were the leaving group one of the larger, softer halogens (i.e., $\ce{Br-}$ or $\ce{I-}$), the order might well be the opposite. Aside from the superior leaving group quality of those larger halogens, another mechanistic advantage of the other order is that it results in the hydroxide leaving group of the final intermediate being shifted over by one carbon, so that the E1cB process leading to the final product results from abstraction of a more acidic allylic $\beta$-hydrogen.

6
Selectivity in aldol condensation between pivaldehyde and acetone
7
Does aldol condensation give different products in different conditions?
7
Mechanism of a cyclization reaction - why does an enol ether form?
0
Reaction of urea and thiourea with nitrous acid
2
Reduction using hydrazine and glycol in alkaline medium
7
Cyclisation of acetone on reaction with conc. H2SO4