What is the importance of iron in complexes and in the process of electron transport?

What is the importance of the iron in complexes and in electron transport? This question is related to synthesis of ATP. I have read about iron-sulfur proteins, but I don't understand how this works.

organic-chemistry biochemistry chemical-biology
Share
Improve this question
edited May 30 '17 at 22:08

The Fe-S proteins are part of the electron-transport chain (together with other complex molecules such as other proteins and coenzymes etc.) In my opinion, I think it would be unfair just to describe the Fe-S complex without understanding bits of the processes and other important molecules involved in this system since it involves a chain of interlinked events.

Components of the Electron-Transport Chain

Many of the proteins embedded in the inner mitochondrial membrane are organized into the four respiratory complexes of the electron-transport chain. Each complex consists of several protein components that are associated with a variety of redox-active prosthetic groups with successively increasing reduction potentials.

The mitochondrial respiratory chain consists of a series of sequentially acting electron carriers, most of which are integral proteins with prosthetic groups capable of accepting and donating either one or two electrons. Three types of electron transfers occur in oxidative phosphorylation:

In addition to NAD and flavoproteins, three other types of electron-carrying molecules function in the respiratory chain: a hydrophobic quinone (ubiquinone) and two different types of iron-containing proteins (cytochromes and iron-sulfur proteins). Ubiquinone (also called coenzyme Q, or simply Q).

The Electron-Transport Chain Can Be Isolated in Four Complexes

Complex I (also called NADH dehydrogenase) passes electrons from NADH to CoQ. Situated in the inner mitochondrial membrane,e contains one molecule of flavin mononucleotide (FMN; a redox-active prosthetic group that differs from FAD only by the absence of the AMP group) and eight or nine iron–sulfur clusters that participate in the electron transport process. 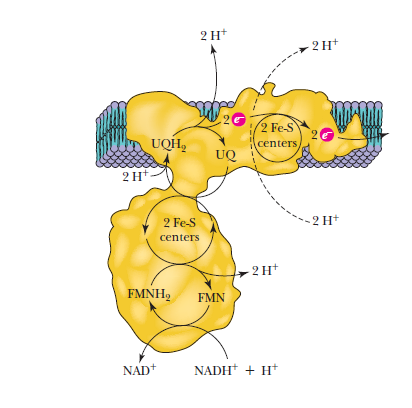 The overall equation for the reaction is:

b. The Coenzymes of Complex I

FMN and ubiquinone (CoQ), the coenzymes of Complex I, can each adopt three oxidation states. Although NADH can only participate in a two-electron transfer, both FMN and CoQ are capable of accepting and donating either one or two electrons because their semiquinone forms are stable. In contrast, the cytochromes of Complex III, to which reduced CoQ passes its electrons, are only capable of one-electron reductions. FMN and CoQ, therefore, provide an electron conduit between the two-electron donor NADH and the one-electron acceptors, the cytochromes.

Complex II is important because it injects these relatively high-potential electrons into the electron transport chain. It catalyzes the transfer of electrons to coenzyme Q.

However, its source of electrons (in other words, the substance being oxidized) differs from the oxidizable substrate (NADH) acted on by NADH-CoQ oxidoreductase. In this case, the substrate is succinate from the citric acid cycle, which is oxidized to fumarate by a flavin enzyme;

The notation E-FAD indicates that the flavin portion is covalently bonded to the enzyme. The flavin group is reoxidized in the next stage of the reaction as another iron–sulfur protein is reduced:

This reduced iron–sulfur protein then donates its electrons to oxidized coenzyme Q, and coenzyme Q is reduced;

The overall reaction is:

Cytochromes are redox-active proteins that contain heme groups that reversibly alternate between their Fe(II) and Fe(III) oxidation states during electron transport.

Complex III passes electrons from reduced CoQ to cytochrome c. It contains four redox cofactors: two b-type hemes, a c-type heme, and one [2Fe–2S] cluster. This complex -CoQH2-cytochrome c oxidoreductase (also called cytochrome reductase), catalyzes the oxidation of reduced coenzymeQ (CoQH2). The electrons produced by this oxidation reaction are passed along to cytochrome c in a multistep process. The overall reaction is;

Cytochrome c is a peripheral membrane protein that is loosely bound to the outer surface of the inner mitochondrial membrane. It alternately binds to cytochrome c1 (of Complex III) and to cytochrome c oxidase (Complex IV) and thereby functions to shuttle electrons between them.

The mitochondrial electron-transport chain. The pathways of electron transfer (black) and proton pumping (red) are indicated. Electrons are transferred between Complexes I and III by membrane-soluble CoQ (Q) and between Complexes III and IV by the peripheral membrane protein cytochrome c (Cyt c). Complex II (not shown) transfers electrons from succinate to CoQ

These Fe-S clusters are present in the complexes described above and play a big part in the electron transport chain, as they are redox active hence allow the transport of electrons along the chain through a series of redox reaction yielding $\ce{H2O}$ in the final reduction of $\ce{O2}$ molecule (producing the ATP molecules along the way). Although this is not exhaustive of the whole process it gives the "main" idea of molecules (including the so-called iron-sulfur proteins you mentioned in the question) and processes involved in the ETC. It was just impossible for me to explain only iron-sulfur proteins without getting into detailed processes

Hope this helps you

Not the answer you're looking for? Browse other questions tagged organic-chemistry biochemistry chemical-biology or ask your own question.

2
What does the adenosine do in ATP?
8
Why is iron used in the body?
1
How does repeatedly freezing and thawing antibiotics decrease their antimicrobial effectiveness?
5
Regarding the mechanism for biological activity of tyramine, amphetamine and ephedrine
3
Reactivity and transport safety of substituted methyl benzoates
1
What provides the energy allowing membrane proteins to facilitate diffusion across the membrane?
0
Using the electrical potential created by the electron transport chain to power electrical systems
5
How many alternative chemical ways to transport oxygen in living creatures are known?