In my chemistry book, the law of chemical equilibrium is derived from the law of mass action:

However, in chemical kinetics, they tell us that the rate equation, derived from the law of mass action is not always correct. That is, the exponents of the concentration terms in the rate equations may not be equal to their stoichiometric coefficients. If this is true then, the above two rate equations ($\eqref{1}$ and $\eqref{2}$) may not be correct for a particular reversible reaction.

Then, how can we apply the law of chemical equilibrium on every reaction, without experimentally verifying the rate equations? If the rate equations derived from the law of mass action are wrong, then the value of $K_\mathrm{c}$ obtained by the final equation will not be constant.

The derivation that you cite only holds true if both forward and backward reactions are elementary steps. In this case, the rate of the forward reaction is indeed given by

and so on, and hence the derivation is logically sound. If they are not elementary steps, then even though the conclusion is correct, the method of arriving there is not, for the reasons you have already pointed out. See also: hBy2Py's answer and Ben Norris's answer where the assumption of an elementary step is explicitly mentioned.

In general the equilibrium constant does not need to be derived in this manner; a more conventional method of arriving at it is by using (pressure here is taken to equal an arbitrary but specified standard pressure $p^\circ$)

The term in square brackets can then be identified as the equilibrium constant, $K$. As you can see there is no need for any recourse to kinetic rate laws.

The big issue here is that there is confusion between the observed rate law, which is not the same thing as the actual rate law.

For example, there are pseudo zero order reactions, but it is impossible for a reaction to be truly zero order (what is reacting then?).

If you write out the full rate law without making any assumptions, every species is involved.

Let's see if I can do this properly.

There are two cases to consider.

Then, how can we apply the law of chemical equilibrium on every reaction, without experimentally verifying the rate equations?

You can derive the equilibrium constant from the rate constants even if the rate law is different than the stoichiometry of the net reaction suggests. It just gets a bit more complicated than in your example.

Here is a simple example with A reacting to form B with the help of a catalyst E (E for enzyme):

Compare to the expected equilibrium expression

For the specific example, this shows that while the enzyme influences the rates (and some steps depend on the enzyme concentration), it does not change the equilibrium (it speeds up both the forward and the reverse reaction). If you think of the common energy diagram, the enzyme (or in more general terms - the path of the reaction) influences the rates and activation energies, but not the position of the equilibrium, i.e. the Gibbs energy of reaction. 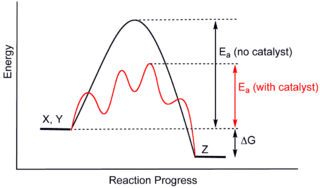 If the rate equations derived from the law of mass action are wrong, then the value of Kc obtained by the final equation will not be constant.

In other words, for elementary reactions, the exponent is basically the stoichiometric coefficient.

The reason why we don’t use stoichiometric coefficients as the exponents for complex reactions is as follows :

When we derive rate law of complex reactions, we combine the rate laws of the elementary reactions (actually, we combine the laws of mass action, but they are the same for an elementary reaction) by getting rid of many concentration terms (practically, we can only measure the concentration of reactants of the rate determining or slowest step, and the final product). So the stoichiometric coefficient of the reactants may or may not appear directly in the final product.

Complex reactions comprise of many elementary reactions and finding out the actual path of every reaction is not very easy. Even if we can find out every intermediate and every reaction involved, it is very tiresome to write the law of mass action for each reaction and get rid of the concentration terms we can’t measure.

So we use experimental data and define order of the reaction (with respect to the reactants) which appear as the exponents in the rate law.