What is the optical nature of the tris(ethylenediamine)cobalt(III) cation? 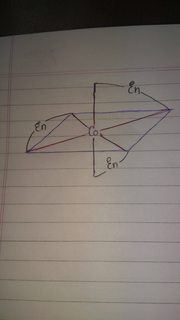 The molecule I've drawn has neither a plane of symmetry nor a center of symmetry, even though some books refer to this as optically inactive.

Can you please elaborate why is this so, or those books are wrong.

inorganic-chemistry stereochemistry coordination-compounds
Share
Improve this question
edited May 24 '17 at 11:26

Ethylenediammine or $en$ is an symmetrical didentate ligand. You can remember a rule of thumb for this if you like:

In the case of $3$ symmetrical didentate ligands, i.e. $[\ce{M(AA)3}]$, the compound exists in only one form, which is optically active

So the complex you've mentioned will be optically active, no doubt.

Also, as a reference, I'm quoting the wikipedia article at https://en.wikipedia.org/wiki/Tris(ethylenediamine)cobalt(III)_chloride#Stereochemistry

The complex can be resolved into enantiomers that are described as $\Delta$ and $\Lambda$.

The only symmetry elements that can be found in $\ce{[Co(en)3]^3+}$ are the three $C_2$ axes of rotation, one of which is shown in this image (colored in red) on wikipedia: https://upload.wikimedia.org/wikipedia/commons/e/e5/Coen3lel3.png 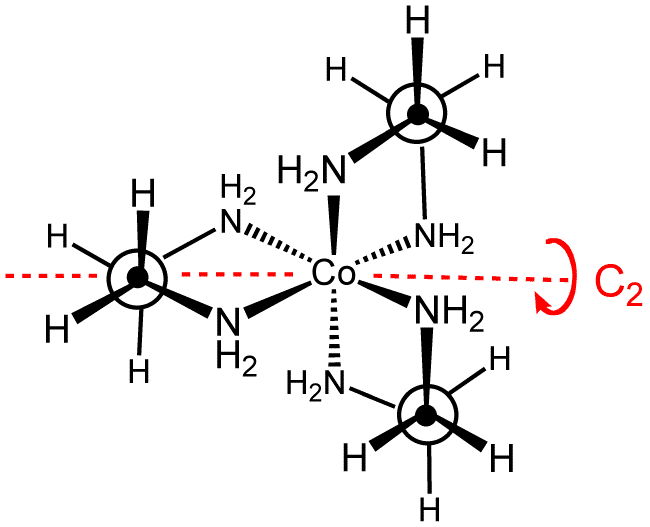 As a side note, here's another rule of thumb:

In the case of $3$ unsymmetrical didentate ligands, i.e. $[\ce{M(AB)3}]$, the compound exists in two forms, namely fac (stands for facial) and mer (stands for meridional), and both of these forms are optically active.

Important note: There's a minute error in this answer; and that's the distinction between optically activity and chirality: I used the word "optically active" while it should've been "chiral". It's bad I missed it, but I'd like you to read Ben Norris' comment on this below. I'm leaving the answer untouched, editing it rip the comment of its value. I encourage you to learn from my mistake.

Some molecules can be chiral even if they do not have an asymmetric carbon. In these molecules, such as the one you draw, it is the overall shape of the molecule that is important. There has to be no centre of inversion or mirror planes (including rotation reflection $S_n$). In point group terms these mirror planes are called vertical, horizontal, dihedral and a mirror plane is part of the rotation reflection operation. They are labelled $\sigma_v,\, \sigma_h,\, \sigma_d,\, \text{and } S_n$ respectively). Your molecule follows this rule in that it has a 3-fold axis and three 2-fold axes at right angles to the 3-fold axes. In terms of point groups this is called $D_3$. There are two enantiometric forms.

The figure shows the symmetry elements. You can see that here is no centre of inversion or mirror planes. Look at www.molecule-viewer.com for examples of point groups and molecules of all different point groups. An explanation of how molecules rotate plane polarised light is summarised in the answer to this question; Dependence of the angle of rotation on the wavelength of plane polarized light 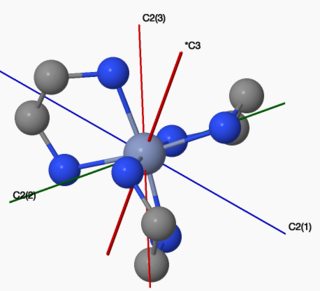 0
Chirality in coordination octahedral compounds
13
What are the criteria for a molecule to be chiral?
4
Dependence of the angle of rotation on the wavelength of plane polarized light

1
Some questions on stereochemistry
3
Is axis of symmetry considered a true symmetry?
4
Can a system of 2 consecutive biphenyl systems be optically active , even if any adjacent biphenyl systems aren't optically active?
1
Can the following compound having a centre of symmetry be called both optically inactive and meso?
6
Optical Isomerism in Coordination Compounds of type MA₂B₂(CC)
0
Which are the Geometrical isomers of the complex [Cr(NH3)2Cl2(en)]+?Is it one or two?
7
Why are complexes of type MA3B3 not optical active?