What would this unsaturated cyclic compound be called?

I came across this compound recently, and havent been able to find out what it's name could possibly be: 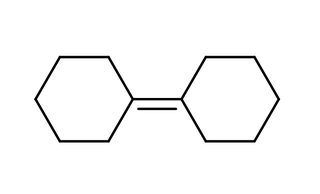 My guess was maybe it's "cyclohexylene cyclohexane", but not quite sure. Can anyone tell me what this compound could be called?

organic-chemistry nomenclature cyclohexane
Share
Improve this question
asked May 24, 2017 at 4:59

Chemspider tells me that the name should be

My guess was maybe it's "cyclohexylene cyclohexane"

There's a flaw to this thinking, to name this, I'd suggest you choose one of the cyclohexane rings to act as the word-root. Now you've to just add the name of the substituent.

Recall that (source: http://www.ebi.ac.uk/chebi/searchId.do?chebiId=65236) also click this link for an example (this website particularly has propylidene group as the example):

An alkylidiene group formed from propane by removal of two hydrogen atoms from the same carbon atom, the free valencies of which are part of a double bond.

So, the substituent in this case would be called "cyclohexyl idene " (without the space). And hence, the name should be cyclohexylidenecyclohexane.

Assemblies of two identical rings linked by a single bond are described in the current version of Nomenclature of Organic Chemistry ŌĆō IUPAC Recommendations and Preferred Names 2013 (Blue Book) as follows:

Assemblies of two identical cyclic systems joined by a single bond are named by one of two methods:

(1) by placing the prefix ŌĆśbiŌĆÖ (see P-14.2.3) before the name of the corresponding parent hydride enclosed in parentheses, if necessary. Parentheses are used to avoid confusion with von Baeyer names;

Each cyclic system is numbered in the traditional way, one with unprimed locants, the other with primed locants. Lowest possible locants must be used to denote the positions of attachment. These locants must be cited in preferred IUPAC names; they can be omitted in general nomenclature when no ambiguity would result.

The name biphenyl is retained as 1,1'-biphenyl.

For assemblies of two identical rings linked by a double bond, the formation of names is restricted to a single method:

When two cyclic systems are linked by a double bond, method (2) described in P-28.2.1 is the only recommended method. Method (2) has also been used in which the presence of a double bond is indicated by the Greek letter ╬ö and the point of attachment of the ring is given by superscript locant numbers. This method is not continued in these recommendations; accordingly, ring assemblies of three or more identical cyclic systems interconnected by double bonds must be named by other methods (see P-31).

Therefore, the preferred IUPAC name of the compound that is given in the question is 1,1'-bi(cyclohexylidene). The name ╬ö1,1'-bicyclohexylidene is no longer recommended.

Not the answer you're looking for? Browse other questions tagged organic-chemistry nomenclature cyclohexane or ask your own question.

0
If something contains large amounts of cyclopentane and cyclohexane, what is it called?
3
What would carbon-oxygen polymer be called?
7
IUPAC name for citric acid
24
Is cis-1,2-dimethylcyclohexane a meso compound?
5
What is "Cresol Soap"?
3
What is the chemical name of the compound H2S4O?
1
What does this dashed and curved line mean in pyruvate molecular graph?
1
Can anyone tell me what reaction is this?