What is rarely discussed, is the difference between actual 'wedged' bonds, and the 'block' variety. The diagram below from Organic Chemistry Strategy and Control by Stuart Warren goes some way to explaining that in theory at least, the two sets of bonds exist to allow us to describe absolute or relative stereochemistry.

(In practice, this is rarely followed, and individual groups/labs tend to, rightly or wrongly, favour one type over another for stylistic reasons).

What has always baffled me, however, is the direction in which the wedged bonds originate/point towards.

In most modern usage, the small end of the wedge/hash is at the chiral centre, and gets larger towards the substituent, however some (mainly older chemists, whom I'm going to give the benefit of the doubt and assume aren't just bad at using ChemDraw) chemists have the hashes differently to the wedges, as per the molecule below.

Is this something that is advisable (presumably it's meant to show some kind of 3D perspective)/are there any actual IUPAC rules/guidelines on this other than following what looks good/is conventional? 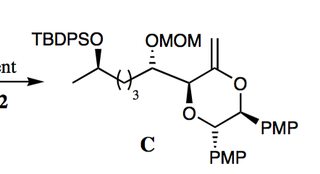 Both schools of thought were prevalent, one said that the narrow end should be considered in the plane of paper, the second said that the wide end should be considered. Perhaps the first was based on a perspective flavored approach while the second mainly relied on popular drawing schemes. Excerpts from the 2006 IUPAC Recommendations1 (more information is given there):

That said, it is possible to use the other bond types in ways that are unambiguous. In particular, any type of hashed bond is unambiguous in print when connected to an atom with no other substituents (a hydrogen atom, a chlorine atom), no other non-hydrogen substituents (a hydroxy group, an amino group), or at most one other non-hydrogen substituent (an ethyl group, an ethoxy group). In each of those cases, a viewer would have no difficulty in understanding that the hashed bond projects below the plane of the paper from the other atom to that atom. Accordingly, both the unwedged hashed bond and the hashed wedged bond with reverse directionality are acceptable when used exclusively in those cases.

However, anyone using bonds of these types should be aware that they are not the most common bond types used to represent behind-the-plane configuration. At best, an author using these types may cause a moment of confusion as a reader figures out which convention was intended. In extreme cases, a reader (or chemical software) might actually interpret the structure incorrectly—for example, by interpreting an unwedged hashed bond in the convention where it would represent relative (and not absolute) configuration, as discussed in ST 0.8 and ST-6. Fortunately, such cases are rare. The hashed edged bond (interpreted from the narrow end to the wide end) remains preferred...

In addition, the recommendations document mentioned by Barry Holmes suggest preferred way to represent relative configuration / racemic mixtures, so the 1st formula in your 1st image representing (±)-syn-27 would be depicted better

Not the answer you're looking for? Browse other questions tagged organic-chemistry nomenclature stereochemistry reference-request or ask your own question.

2
Nomenclature for stereoisomer example possible wrong?
29
Why are DCM and chloroform so resistant towards nucleophilic substitution?
0
Chromene and cumarin nomenclature
4
Steroid nomenclature: β-sitosterol
5
IUPAC nomenclature of 1,2,3,4-tetramethylcyclobutane
4
How to wedge d/hash notation a molecule?