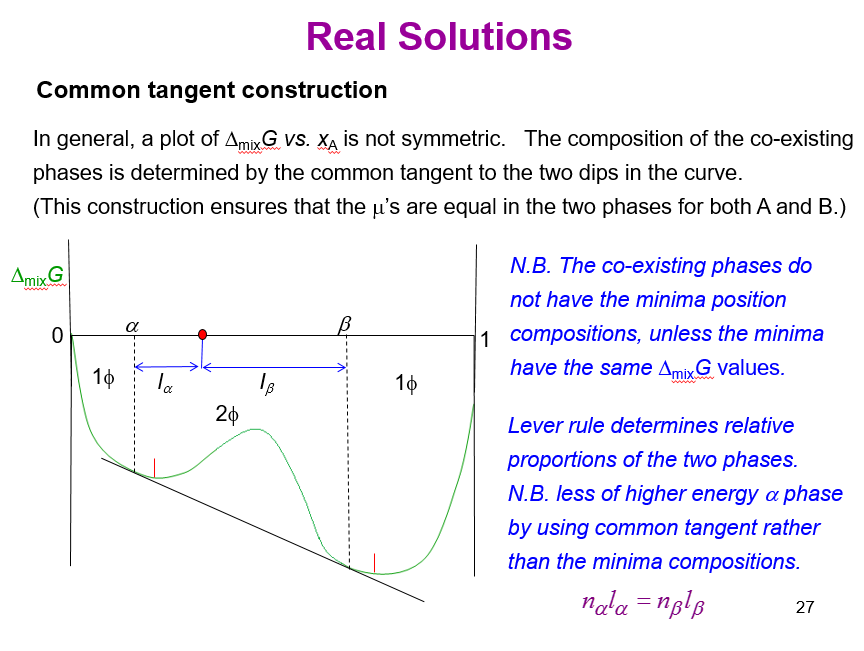 physical-chemistry thermodynamics
Share
Improve this question
asked May 23 '17 at 15:00

First, it's important to understand what the common-tangent construction actually is. Concretely, consider a solution of species $A$ and $B$. The solution may be of a single phase, or of two phases $\alpha$ and $\beta$; this scenario corresponds to that shown in the provided image. Let's say that $\alpha$ is 20 mol% $A$ and $\beta$ is 60 mol% $A$.

The common-tangent construction represents $\Delta g_\text{mix}$ in the two-phase system, whereas the green curve in your image represents $\Delta g_\text{mix}$ in the one-phase system. Since the Gibbs free energy is minimized at equilibrium, whether or not the system actually has one or two phases will depend on whichever system has the lower energy, which is easily compared visually.

With regards to your second question, it is worth noting that a two-phase system cannot dominate over the entire range of $x_A$. Indeed, consider a solution of 15 mol% $A$. Such a system cannot exist in the two phases $\alpha$ and $\beta$, as it has a lower mole fraction of $A$ than either phase. That $\Delta g_\text{mix}$ be concave up for some region of the one-phase system indicates that a two-phase system will exist over some $x_A$, but not all $x_A$.

We turn now to your first question: how does the common-tangent construction ensure that both phases have equal chemical potential?

A physical answer. The common-tangent construction minimizes $\Delta g_\text{mix}$ over some range of $x_A$, and the equilibrated system over this range must consist of the two phases $\alpha$ and $\beta$, and necessarily two phases at equilibrium have the same chemical potential.

Several answers (full disclosure - mine) are available that shed at least some light. So read them first.

Plot Binary Eutectic from Temperature of Melting and Enthalpy

OK. Now to your confusion (I think). What does a straight line across a plot of free energy vs composition actually mean? Well, mathematically that straight line represents the weighted average of the pure free energies, $x_{A}G_{A} + x_{B}G_{B}$ (perhaps more obvious using $x_{B} = 1-x_{A}$). So, $G_{A}$ is the intercept at $x_{A}=1$ and $G_{B}$ is the intercept at $x_{B} = 1$. If the free energies are a fixed value, the chemical potentials are a fixed value. So, the tie-line that is a common tangent to two free energy curves is the solution where the free energies (chemical potentials) are equal in both phases.

As for why the one-phase region does not chemically separate, the question is why should it? There is no second composition that has a common tangent, so there is not way to make the chemical potentials the same in two phases while in a one-phase region.

3
Electrode potentials at interfaces?
8
Why do we use dG < 0 to describe a spontaneous process?
2
How accurate would be the following conclusion on 'Critical Temperature'?
4
How is a phase equilibrium defined for a one-component system?
5
If volatility depends on intermolecular forces, then why in Raoult's law, two substances have different volatility?