Are glucose and galactose cis-trans isomers of each other?

I would also appreciate some references to verify the correct use of terminology in this situation.

NOTE: I have edited this question to clarify that I'm interested in the cyclic form as well.

Glucose and Galactose are best described as epimers of one another.

The three structures below all have the same molecular formula and the same connectivity, but differ in the absolute configuration at a single stereocentre (this is the definition of an epimer). 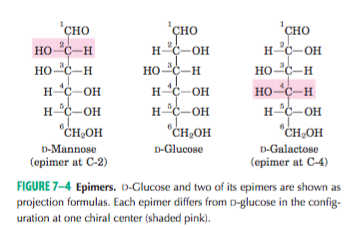 To comment on the use of cis and trans.

The cis/trans nomenclature is used to describe the geometric isomerism of alkenes - it is not correct nor appropriate to use it in this context. What you may be referring to is whether two adjacent stereo centres are syn or anti to one another.

Since the question was revised, I have revised the answer as well to include more information:

Glucose and galactose are not cis isomers, but diastereomers called epimers,

The explanation below gives some insight on what forms of isomerism such sugars exhibit:

The predominant form of stereo-isomerism in such sugars as monosaccharides is optical isomerism.

The stereochemistry and configurations for the aldohexoses (monosaccharides) was put forward by Emil Fischer in 1896. According to the Fischer convention,

D sugars have the same absolute configuration at the asymmetric centre farthest removed from their carbonyl group as does D-glyceraldehyde. The L sugars, in accordance with this convention, are mirror images of their D counterparts

Note that the designation D or L merely relates the configuration of a given molecule to that of glyceraldehyde and does not specify the sign of rotation of plane-polarized light.

If the sign of optical rotation is to be specified in the name, the convention of D or L designations may be used along with a + (plus) or - (minus) sign. Thus, D-glucose may also be called D (+)-glucose because it is dextrorotatory, whereas D-fructose , which is levorotatory, can also be named D(-)-fructose. 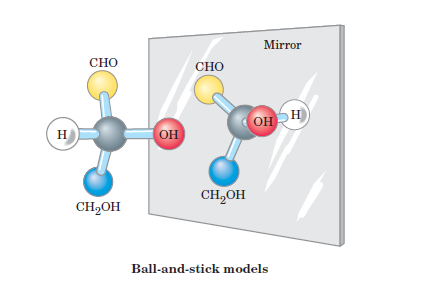 The relationship between the enantiomers

One of the enantiomers is simply a non-superimposable mirror image of the other one. A chiral (asymmetric) carbon atom is the usual source of optical isomerism, as was the case with amino acids. The simplest carbohydrate that contains a chiral carbon is glyceraldehyde, which can exist in two isomeric forms that are mirror images of each other.

The same is true for cyclic forms of sugars (not cis-trans isomerism):

The cyclization of a monosaccharide renders the former carbonyl carbon asymmetric. The resulting pair of diastereomers are known as anomers and the hemiacetal or hemiketal carbon is referred to as the anomeric carbon. In the α anomer, the OH substituent to the anomeric carbon is on the opposite side of the sugar ring from the CH2OH group at the chiral center that designates the D or L configuration (C5 in hexoses). The other anomer is known as the β form;

A slight misconception. According to http://www.chemguide.co.uk/basicorg/isomerism/geometric.html, the definition of geometrical isomers is (emphasis mine):

These isomers occur where you have restricted rotation somewhere in a molecule. At an introductory level in organic chemistry, examples usually just involve the carbon-carbon double bond - $\cdots$

So basically classifying glucose and galactose as geometrical stereoisomers by using terms such as cis and trans is wrong in this context.

They're stereroisomers no doubt, but calling them diastereomers would be a better choice (i.e., try taking a mirror image of glucose and you're not going to get a structure which matches with that of galactose - this makes them non-mirror image isomers, better called as diastereomers; see also Addendum at the bottom of this answer). Terminologies such as R/S nomenclatures would be more appropriate in this case.

Nope, firstly because of the usage of the word cis-trans.

Considering the chain structure of glucose:

Another thing is that when you look closely at the structure of glucose which is, you'll notice that it has only $4$ chiral carbon atoms. Chiral atoms are atoms which have four different groups/atoms attached to them. I'm marking the chiral atoms with red stars for you:

You might want to exclude glucose itself with gives you the answer as $15$.

If you're talking about the ring (glucapyranose structures) then it's true that $\alpha$ and $\beta$ forms will double the number and therefore you'll end up with $32$ isomers. Excluding glucose, again the number lessens by unit to give us the final answer as $31$

Diastereomers are stereoisomers not related through a reflection operation. They are not mirror images of each other. These include meso compounds, cis–trans (E-Z) isomers, and non-enantiomeric optical isomers.

The case we're dealing with (in context of glucose and galactose) is of non-enantiomeric optical isomers.

Not the answer you're looking for? Browse other questions tagged organic-chemistry stereochemistry isomers carbohydrates cis-trans-isomerism or ask your own question.

11
Effect of periodic acid on cyclohexane derivatives
2
Cis and Trans Isomerism in Resonance-Stabilized Compounds
2
How can you predict relative Rf values of cis-trans isomers in thin layer chromatography?
12
What is the reason of the color difference for the cis/trans isomers of tetraamminedichloridocobalt(III) chloride?
3
How did they assign absolute configuration to these cis and trans 2-methylcyclohexanols?
2
Cis and Trans Isomerism given three different groups around the reference plane
9
Determining if the product would be cis or trans after an anti elimination on fischer projections