Would the carbocation intermediate undergo rearrangement?

I have my concerns regarding option (a) in this question. 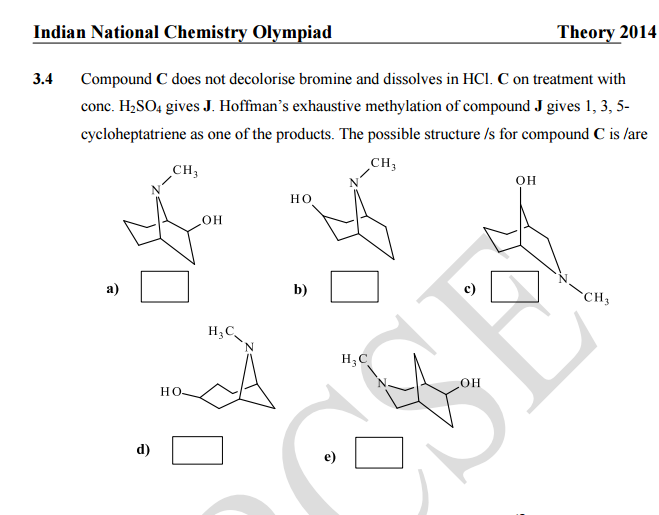 I know that this situation can arise because I have tackled it before and the answer was an addition product in that case, but that reasoning contradicts with the official answer key in this question. (The answers are a,b and d).

The shift I called for was the bond between carbon (endocylic with nitrogen) and the carbocation.

Unfortunately, I cannot back this with references at the moment but in my opinion there should be no carbocation formed in the first place and therefore no tendency to undergo any Wagner-Meerwein rearrangements.

Secondary carbocations, while being less unstable than primary ones, are still rather unstable. There are no stabilisation mechanisms that suggest themselves in the reaction conditions (concentrated sulphuric acid) in which the nitrogen will be protonated and therefore unable to stabilise a carbocation in α position. I would assume that the elimination proceeds much more $\mathrm{E2}$-like: likely with no intermediate carbocation at all but if there is one it should be extremely short lived and the neighbouring proton should dissociate practically instantly.

There are multiple possibilities for this reaction, elimination may not come first, Wagner-Meerwein rearrangements may occur before this. For both A and B, rearrangement occurs before elimination. For D it is straightforward, the -OH will be eliminated and the corresponding alkene will be formed. For B, the -OH will first be protonated, the carbon nitrogen bond of the bridgehead carbon farther away will be broken. The nitrogen atom will then form a bond with the carbon having the -OH2 substituent, the loss of water will follow. This generates D, but a carbocation is in place of the -OH group. This compound can undergo elimination to generate the same alkene as D generated. Your question is pertaining to the lack of rearrangement of the carbocation. It cannot rearrange to one of the tertiary bridgehead carbons, because of Bredt's rule. So when heating in concentrated sulfuric acid, the major elimination product will be the alkene mentioned previously. While B and D proceed through this alkene, A proceeds through a Wagner-Meerwein rearrangement similar to B. This yields a carbocation. This carbocation will rearrange (but not in the context you had) because of angle strain on the adjacent carbon. The rearrangement increases stability and elimination then occurs to yield the same product as B and D. This then undergoes transformation to cycloheptatriene under the conditions provided.

4
Hydrolysis of 4-chloro-3,3-dimethylbut-1-ene forms which products much faster than primary alkyl halides?
5
Reaction involving markovnikov's rule
6
Ring contraction in pinacol rearrangement of cyclohexane-1,2-diol
8
Bromonium ion or Mesomeric effect ( intermediate during addition to alkenes)
2
Reaction of cyclohexene with hydrochloric acid
5
NGP mechanism vs the simple carbocation mechanism
4
Determining the stereochemistry of the product(s) when an alkyl shift in a carbocation generates a chiral carbon
3
Quaternary Ammonium salts and peroxy acid