Why does ice melt slower at higher altitudes? [closed]

Why does ice melt slower at higher altitudes and how does Le Chatelier's principle play a role in this?

This question appeared right after this chapter in my text book and I've also read a very rough explanation from another source which cited this principle.

physical-chemistry thermodynamics equilibrium
share|improve this question
edited May 18 '17 at 16:24

For a simplified answer that attempts at a solution using Le Chatelier's principle, you'll need a constraint: Ice and water are at an equilibrium at $\pu{0^\circ C}$.

Simple enough, now pull up the values of densities of ice and water, $\rho_{ice}= 0.9167~\pu{g/cm3}, \rho_{water}= 0.9998 ~\pu{g/cm3}$. Mass being the same, you can conclude that volume of ice is greater than that of water, so in accordance with Le Chatelier's principle, when you move at higher altitudes, the atmospheric pressure falls, thus the equilibrium is favored towards a side where the species occupy a higher volume, i.e. towards the formation of ice. This works antagonistically for $\ce{Ice->Water}$.

Alternatively, have you heard of phase diagrams? This might help you to understand things a bit more clearly after you go through its definition from other sources: https://chemistry.stackexchange.com/a/72732/43942

The phase diagrams for water are different though. 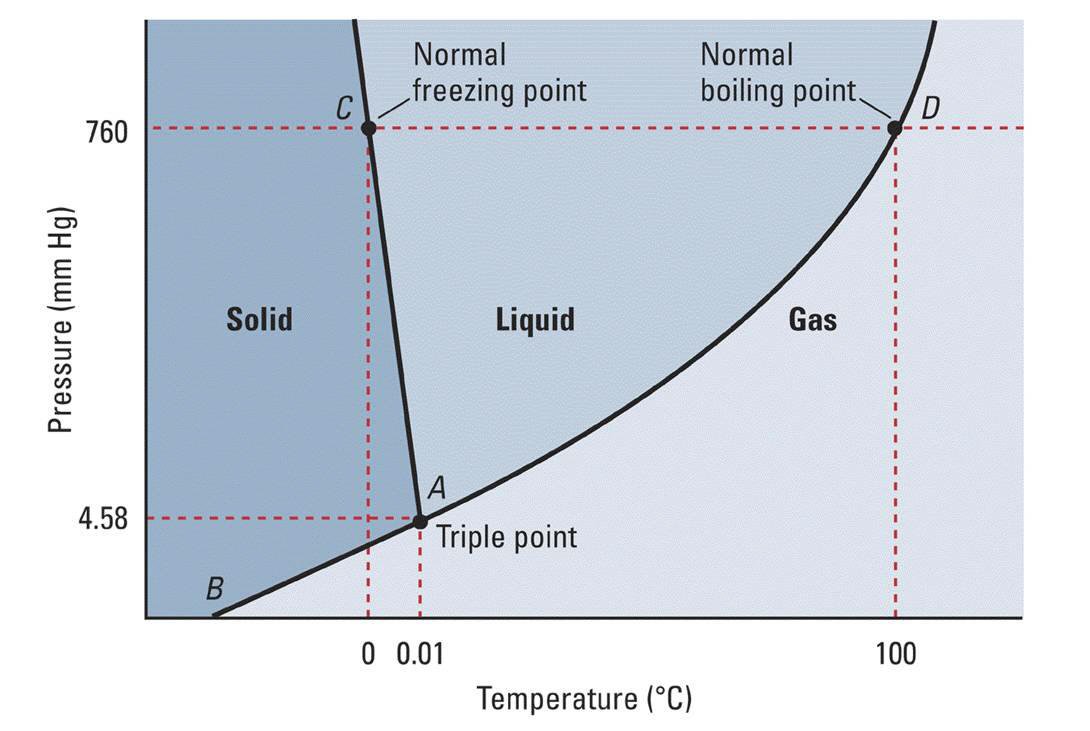 This, too indicates that for water, at lower pressures, the formation of solid (i.e. ice) is more favored.

Although this is quite a significant pressure (see Jon's comment) for our perception, it doesn't affect freezing that much. For a comparison, this answer https://chemistry.stackexchange.com/a/8883/43942 states that the pressure required to solidify $\ce{CO2}$ to make it into dry-ice at room temperature, you'll need a pressure of about $\pu{56 bar}$.

Also, airhuff suggested that thermal conductivity of thin air at high latitudes may have a role to play in this. I searched this up, you might want to look at this paper: http://nist.gov/data/PDFfiles/jpcrd269.pdf

Easy. As you get higher, there is less air, making the area colder. So, the ice is surrounded by colder and colder tempatures.

Not the answer you're looking for? Browse other questions tagged physical-chemistry thermodynamics equilibrium or ask your own question.

1
Can a liquid turn to a solid by applying pressure?
2
How much pressure is needed to make dry ice?

4
How to figure out the state of aggregation of an unknown substance via properties of a chemical equilibrium in a closed system?
5
Correlation Diagram Doesn't Match Selection Rules?
6
Why are C6 dispersion forces named C6?
4
What is the molecular interpretation of Raoult's law?
3
Henry's law and O2 concentration in alveoli blood
14
Aurora borealis - less favored energy transitions higher in atmosphere?
5
Why does increasing the pressure cause ice to melt more?
1
Defining the position of equilibrium