I am trying to undertake a first order analysis of the spectrum below: 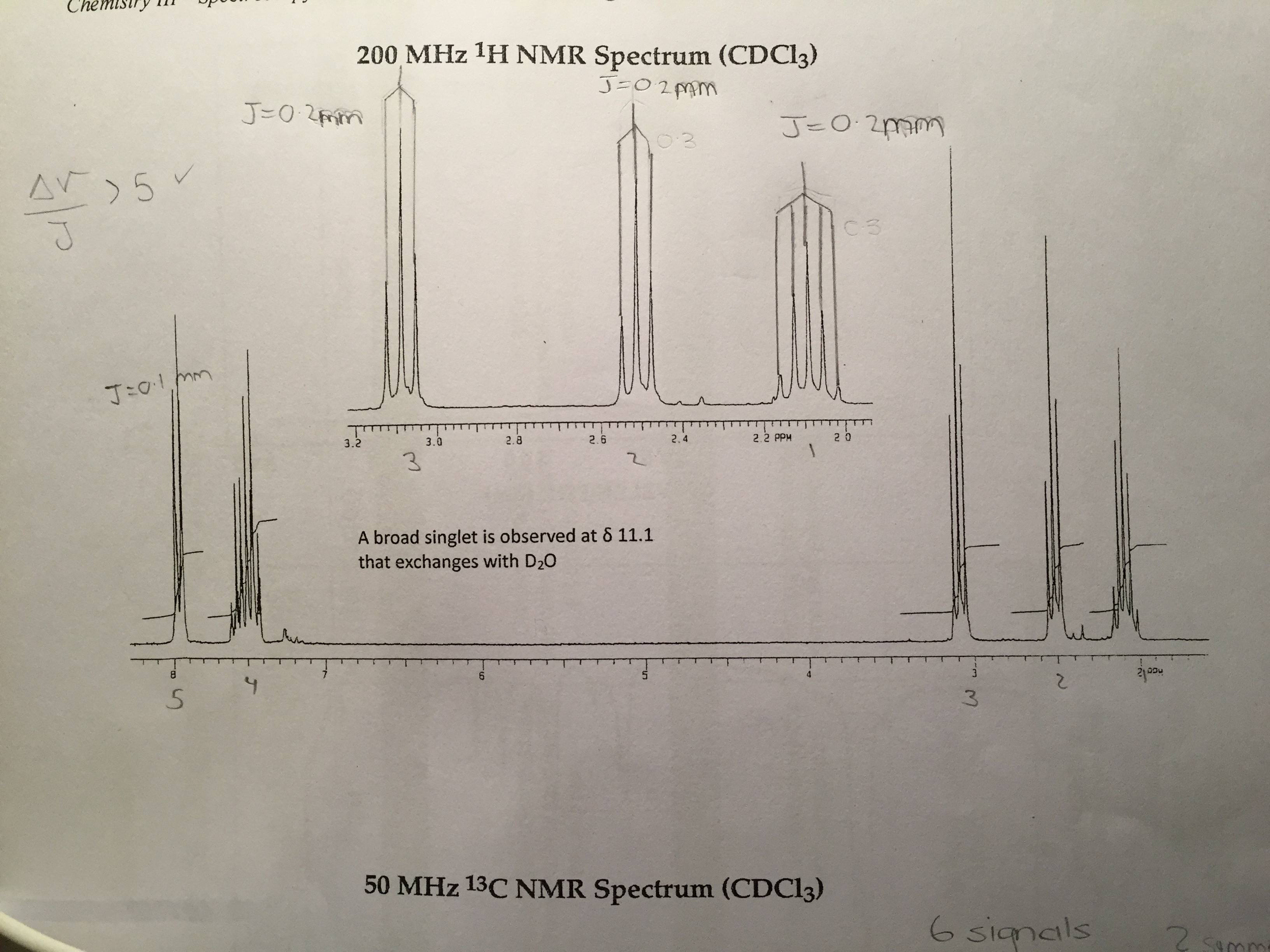 My issue is that every signal appears to have the same coupling constant (I am aware that the value should be reported in Hz, the spectrum just has some of my rough working on it). This does not make sense to me, as I understand that would imply each hydrogen is equally coupled to each other. I also am at a loss of what type of multiplicity the signal multiplet at 7.5ppm has.

Any help is really appreciated

To work out which nuclei are in fact coupled, you would use other information. A set of homonuclear decoupling experiments, or a COSY experiment would give this information clearly, although there is some very useful information in this spectrum. Your signals at 2ppm, 2.5ppm and 3ppm all show significant 'tenting'; they lean towards their coupled partner. That is, you do not get a true Pascal's triangle intensity, with the peaks closer to their coupled partner having greater intensity, as shown below:

The signals at 2.5 and 3 both lean towards the right, indicating they are coupled to something upfield (the signal at 2ppm). Similarly, the peak at 2ppm is leaning to the left, indicating it is coupled to the peaks at 2.5 and 3ppm. You could use your integrals of 2:2:2 to rationalise a -CH2-CH2-CH2- chain. And this would explain the expected splittings you see of a triplet (3ppm), triplet (2.5ppm) and triplet of triplets (2ppm). Of course, if you draw out your splitting diagram for a triplet of triplets with identical coupling constants, it will give you a pentet with intensity 1:4:6:4:1.

To answer your second question, you should try to predict what nuclei these signals represent. I have drawn out some useful props below to assist in the interpretation. 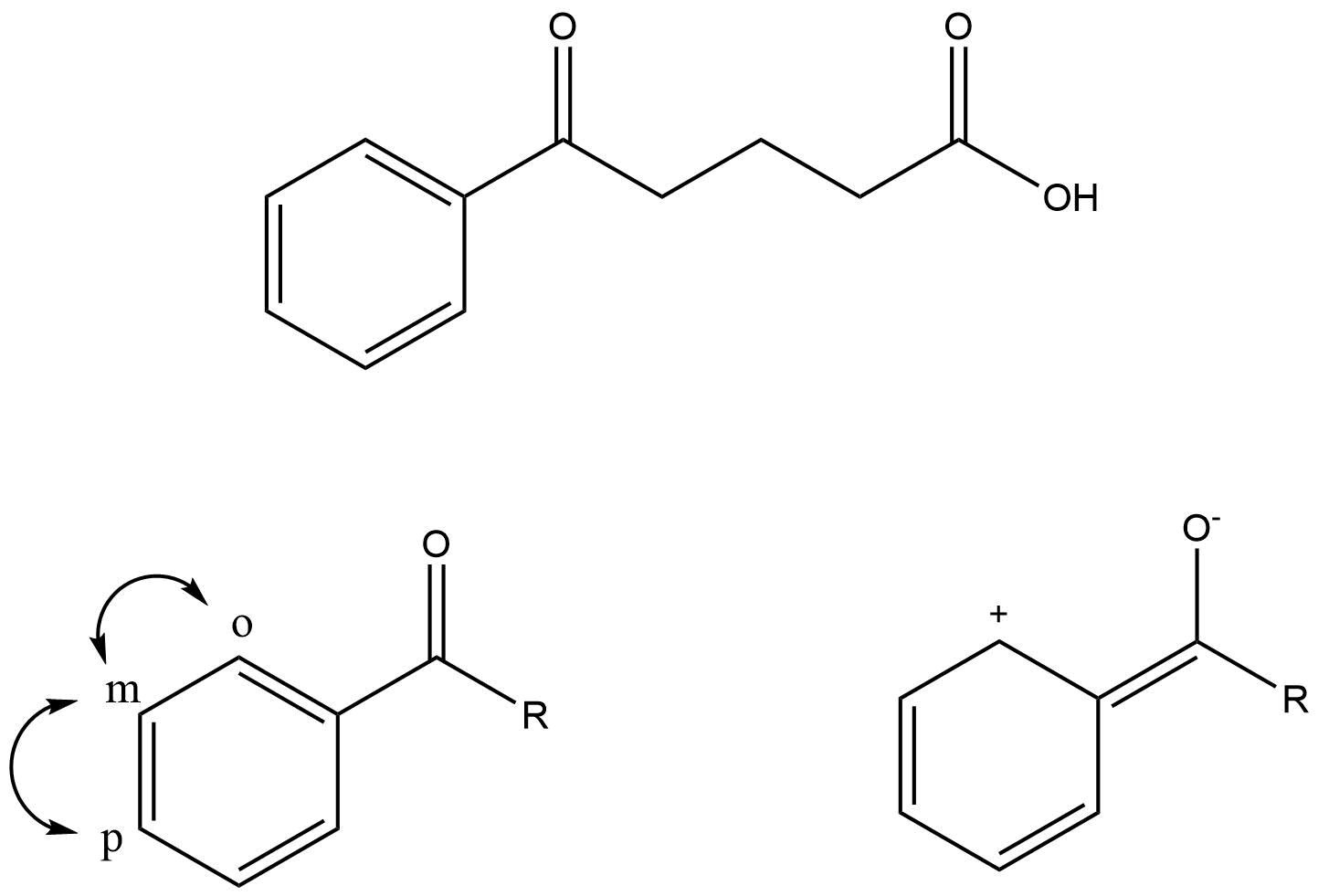 The signals between 7 and 8ppm come from your mono-substituted benzene ring, so you have three distinct environments: ortho, meta and para to the substituted position. They should integrate 2:2:1. The coupling constants for protons around an aromatic ring aren't important for this exercise, other than to say you will only see splitting due to a proton on an adjacent carbon; that is, 3J coupling. So, you have 5 aromatic nuclei in 3 environments, that integrate 2:2:1, and I can see 2 sets of signals that integrate 2:3. Clearly you have two signals overlapping at 7.5ppm. Which signals?

What else can we see? The substituent on the benzene ring is a -(C=O)-R. This is a strongly electron withdrawing group, and so if you draw out your resonance structures for this, you will find that the ortho protons are deshielded compared to the meta protons, and so will be downfield of them. The para protonalso experiences a bit of shielding, and so will also be downfield of the meta protons. So, you can assign the peak at 8ppm as your ortho proton; furthest downfield fits with your electronics adn doublet fits with your expected splitting. The overlapping peaks at 7.5 are the para proton (the left hand side of the forest); this fits with your electronics and (if you were really keen) you could assign some of these peaks to a triplet. The remaining right hand side of the peaks are your meta signals, and again you could assign this asa doublet of doublets. Of course some of the lines for the para and meta signals are overlapping (actually, possibly just one). You could resolve these signals on a higher field instrument quite easily.