I am supposed to provide a mechanism for the above transformation. I observed that the order of substituents on the product is same as that on furan, and since furan undergoes Diels–Alder reactions, I came up with the following mechanism:

Is my Diels–Alder product correct? After this, however, I have no idea how aromaticity is restored.

Your Diels–Alder adduct is pretty much correct. Without any further evidence we cannot definitely say whether the exo or the endo adduct is formed (you have drawn the exo adduct, which generally arises via thermodynamic control). However, the stereochemistry of this adduct does not affect the final product, so it does not matter which one is formed.

By the way, you also should think about the regioselectivity of the Diels-Alder reaction, i.e. why do the $\ce{NH2}$ and $\ce{COMe}$ end up ortho to each other and not meta. You need to have a better reason than simply "that's the way it was drawn in the product". Generally, this is rationalised by looking for the largest coefficients in the HOMO of the diene and the LUMO of the dienophile. The HOMO of 2-aminofuran is likely to have a large coefficient on C–5 (opposite the amino group), whereas the LUMO of methyl vinyl ketone has a large coefficient β to the carbonyl group.

The subsequent steps are not anything fancy. Generally, $\mathrm{sp^3}$ carbons that are bonded to two heteroatoms tend to collapse (e.g. tetrahedral intermediates in nucleophilic acyl substitution; hydrates; etc.) In this case the nitrogen kicks out the oxygen. Note that the other option of oxygen kicking out nitrogen is not possible, as that would lead to a bridgehead double bond. 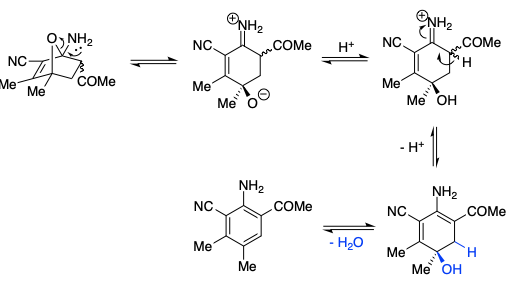 Ordinarily you need some sort of acid or base catalyst, but presumably here, the thermodynamic driving force for the collapse is large (relief of ring strain + product is aromatic), and the high temperature provides the energy required to overcome the activation barrier. The last elimination step probably occurs via an E1 mechanism, since there's no good base present.

Not the answer you're looking for? Browse other questions tagged organic-chemistry reaction-mechanism heterocyclic-compounds pericyclic or ask your own question.

17
Why is the exo product formed in the Diels–Alder reaction between furan and maleic anhydride?

14
What's the mechanism of the reaction of (E)-methyl 3-(furan-2-yl)acrylate in acidic methanol?
5
Endo rule and stereoselectivity in the Diels-Alder reaction
1
How to calculate the theoretical yield of a Diels-Alder reaction?
27
The order of aromaticity of benzene, thiophene, pyrrole, furan, and pyridine
8
Reaction of conjugated alkene with KNH2
9
Effect of substituents on arene oxide-phenol rearrangement
5
Mechanism for Diels–Alder of alkene with substituted thiophene sulfone with loss of sulfur dioxide
6
Grignard reaction with cycloheptatriene
9
How to make cyclohex-4-ene-1,2-diol from cyclohexa-1,4-diene?