What does "percentage by mass" mean in the context of a compound dissolved in a solution?

Isn't it impossible to find the percentage by mass in this case? We don't know the total mass of the leach solution, and it could be anything. Is the question wrong, or is the definition of percentage by mass different than what I'm using?

is the definition of percentage by mass different than what I'm using?

Nevertheless, as a rule of thumb, you'd say, I advise you to go for the calculation of mass by volume percentage unless the questioner explicitly mentions or you've been given enough data.

Find the percentage by mass of copper in the leach solution.

Now that you already have the concentration of $\ce{Cu^2+}$ ions with you, you just need to calculate the number of moles, then the mass and finally divide it with the volume of the mixture.

Oxidic sources of copper are well known for their amenability to sulfuric acid leaching, for eg. azurite, malachite, tenorite, cuprite, chryosocolla, and brochantite dissolve easily in dilute sulfuric acid. Note that too dilute concentration is refrained from since we don't want hydrous ferric oxides to precipitate (they can adversely effect copper extraction).

And as a side-note, if you remove copper sulfides and iron sulfides, the $\ce{H2SO4}$ requirement would be about five times the weight of the dissolved copper (concentrated $\ce{H2SO4}$ is a good oxidizer).

Interestingly, this question was asked in University of Cambridge international examinations October/November 2010, your question is perhaps a simplification of this: 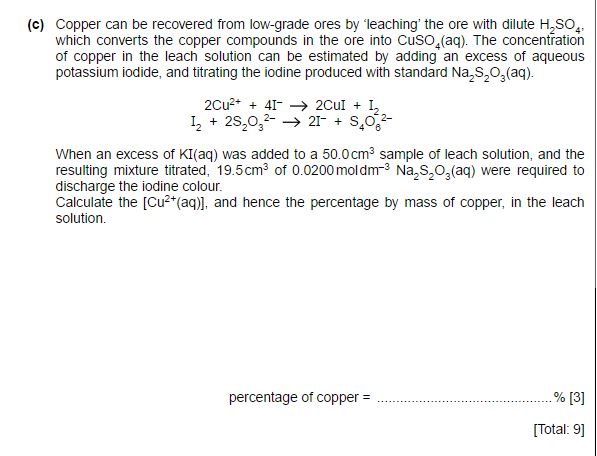 Not the answer you're looking for? Browse other questions tagged inorganic-chemistry physical-chemistry aqueous-solution concentration or ask your own question.

4
What does m± represent in the equation for mean activity of a salt solution?
2
What does this scale mean?
2
What is the correct definition of hydration enthalpy and why is it always negative?
1
Molar Absorptivity of Copper(II) Sulfate
0
When recovering Copper from Copper Chloride via Aluminum, why can't we use Sodium instead to make Sodium Chloride?
6
Scientific Reason for Salt Solution Gaining Volume
1
Acid solution — lower pH when diluted
1
Separating sodium sulfate from chromium trioxide solution