Why is current non-zero when applied potential is still below E$^0$ in cyclic voltammetry? 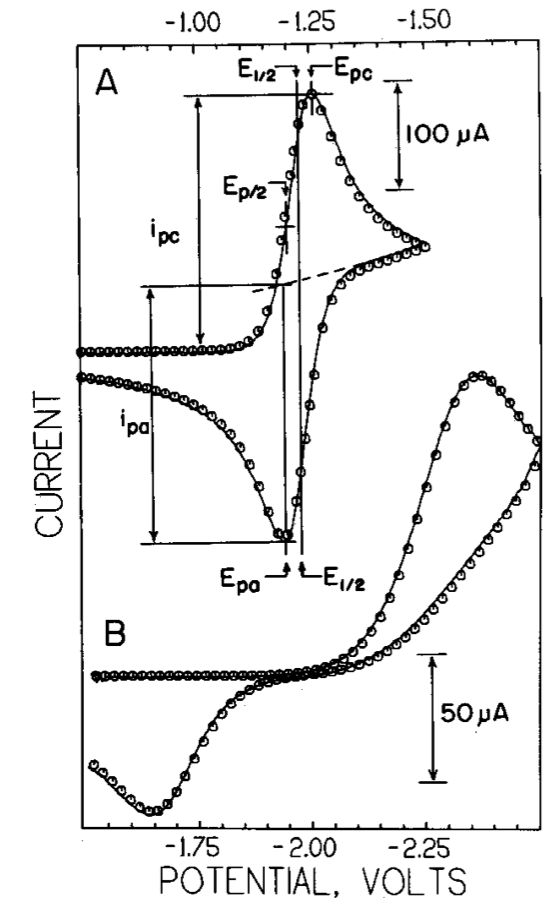 I think you may be coming at this question from the wrong angle. Since I'm not entirely knowledgeable about electrochemistry, I'll give a somewhat qualitative answer, the general idea of which I hope to be understandable.

Fundamentally, what you are doing is taking a system containing a species, say $\ce{A}$, and its oxidized form $\ce{A+}$ (of course this same argument applies for the reduced form $\ce{A-}$ if you sweep in the other direction of voltage). In the absence of an applied voltage, the system is at equilibrium with a certain concentration of $\ce{A}$ and $\ce{A+}$. Let us consider that $\ce{[A]}$ $\gg $ $\ce{[A+]}$. This implies that the equilibrium constant for $\ce{A <=> A+ + e-}$ is much smaller than 1, and therefore that the oxidation reaction has a high positive standard reaction free energy change $\Delta _r G^{o} \gg 0$ (loosely speaking, the reaction is "not spontaneous" in standard conditions, though this sort of thinking is misleading, as I explain later).

The important thing to notice is that all this time, the potential sweep is altering the reaction free energy incrementally. Since the free energy is shifting, the associated equilibrium constant is also changing. At voltages much than lower $E^{ox}$, $\Delta _r G = \Delta _r G^{o} + nFE \gg 0$, and so even though the reaction free energy is lowering, it is still quite positive and the associated equilibrium constant is still much smaller than 1. Thus the reaction is only slowly shifting towards products, and therefore there are few electrons being passed into the circuit, and the current is close to zero. However, when the voltage applied starts to get close to the oxidation potential, even if $\Delta _r G < 0$, the equilibrium constant will be smaller than but somewhat close to 1, and there is some conversion of $\ce{A}$ into $\ce{A+}$, creating a current below the formal oxidation potential.

The whole problem comes from thinking that as long as $\Delta _r G < 0$, a reaction "happens", while for $\Delta _r G > 0$, the reaction "doesn't happen". In truth, there is a gradual change of equilibrium concentrations as a reaction goes from one regime to the other. Even if $\Delta _r G > 0$, if it sufficiently close to zero then the equilibrium constant is only a bit smaller than 1, and you can expect appreciable amounts of products. Notice that in the voltammogram, the current is practically zero until about 0.1 V away from the oxidation potential, and it only really starts to pick up around a mere 0.05 V away. Even though these values mean $\Delta _r G > 0$, they are sufficiently close to the oxidation potential that the equilibrium constants aren't so small, and so you can actually measure a significant amount of species being oxidized.

I'm having a hard time understanding fully what the question is asking.

I think the answer to the question is that there is an energy associated with the full oxidation of whatever chemical you are working with. So basically, the more you oxidize the working electrode the easier it becomes.

This also makes the reduction harder. If the skin/oxide you have on the working electrode has Van der Waals forces associated with it, it's not going to be as easy as just applying the normal potential to remove/reduce the oxide; you have to apply a little bit more negative potential.

If I completely misunderstood the question, just let me know; I'm pretty familiar with CVs.

Not the answer you're looking for? Browse other questions tagged electrochemistry cyclic-voltammetry or ask your own question.

2
Why are signals broadened in polarography?