In the mechanism of Cannizzaro reaction why does the hydride migrate rather than the benzene ring? [duplicate]

Ask Question
Asked 3 years, 1 month ago
Active 3 years ago
Viewed 142 times
8
$\begingroup$
This question already has an answer here:
Why does a hydride shift take place in the cannizzaro reaction? (1 answer)
Closed 3 years ago. 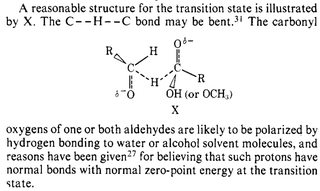 0
Why does a hydride shift take place in the cannizzaro reaction?

10
Ring expansion from a given cyclic carbocation
11
Comparing the reactivity towards aromatic electrophilic substitution reaction
1
Why are more electronegative atoms better leaving groups?
4
Synthesize coumarin from 4-allyl-2-methoxyphenol (eugenol)
7
What will be the possible major product(s) on heating this primary alcohol i.e. 9-fluorenylmethanol with (conc) H2SO4?
8
Which of these carbocations are more stable?
0
Generalizations regarding functional groups on benzene ring