Could chromatography induce a conformational change?

If you run it through a normal phase column, could the stationary phase cause a change in conformation to, let's say, a hydrophilic core and hydrophobic outer surface?

Also, if this could happen, then it would initially go through the column at a rate similar to the mobile phase and then slow way down, yes? If so, what would be the implication? Would the peaks be broadened?

While I do not have numbers at hand to support it, I think it is possible, chromatography on silica indeed may influence, may restrain the conformational flexibilty of molecules in the mobile phase.

Normal phase chromatography depends on adsorption. A complete rotation around a $\sigma$-bond, even in absence of other molecules around, needs some energy to pass from one stagggered to an other staggered conformtion. 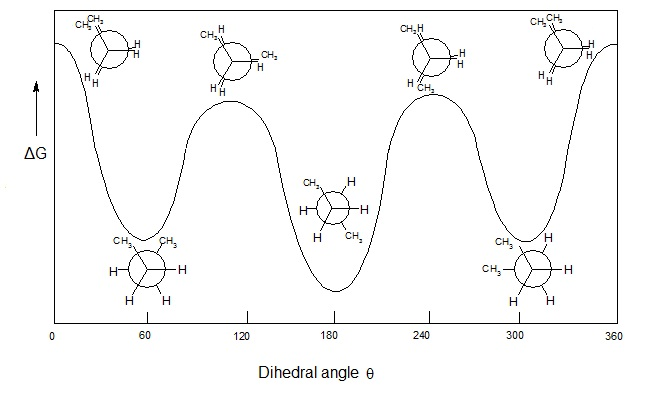 If there were now -- instead of methyl groups separated by three bonds, as depicted in the diagram -- two groups with a high affinity to the stationary phase, this said energetical barrier would increase. Assuming lowered temperature and affinity of these groups "just intense enough" (e.g., deportontated sulfonic acids, not per-alkylated ammonium groups), the propability to find one molecule in such $\ce{s-cis}$ conformation will increase. I just see a potentially relevent publication Langmuir, 2004, 20, 10639–10647 about proteins decoiling on silica. I imagine, amphiphlic structures like reverse micelles may be equally influenced and will "swap their inner to the outer" as if they were (again) exposed to aqueous systems when facing silica.

Yet I am still hesitant to state if this may by become a constraint, leading to a situation where once conformation is looked, as in the instance of atropisomers.