Reaction of coumarin with phenylmagnesium bromide

I came across this problem..

I thought that the Grignard reagent, PhMgBr, would cleave the lactone and then subsequently add to the ketone formed, giving an allylic tertiary alcohol after aqueous workup. Treatment with acid would then lead to intramolecular etherification, giving 2,2-diphenyl-2​H-1-benzopyran:

But then our chemistry professor gave out a different mechanism for this reaction as follows.

What is the correct product?

In terms of regioselectivity, at least for the first addition of the Grignard reagent, I suggest to have a look on the cumarin, that may be seen as an α,β-unsaturated carbonyl compound. Hard nucleophiles (in terms of HSAB principle) like $\ce{MeLi}$ would almost exclusively react with the carbonyl carbon, as you drew in your reaction equation. Soft nucleophiles, such as cuprates, would prefer the 1,4-addition.

Going from $\ce{MeMgBr}$, to $\ce{EtMgBr}$, $\ce{i-PrMgBr}$, and $\ce{t-BuMgBr}$ gradually lowers the polarity of the bond between the metal (magnesium) and the directly attached carbon atom. Hence, along with this line (in other words, as a trend), the preference to react in 1,4-position (more like Michael reaction) increases on expense of the reaction of this nucleophile on the carbonyl carbon. I speculate the bond in the Grignard reagent, between $\ce{Mg}$ and the phenyl group in $\ce{PhMgBr}$, is even less polarised, than in the instance of $\ce{t-BuMgBr}$, and hence conclude at least a significant portion of the product of the first addition formed will be the one of the 1,4-addition (second drawing).

As @Zhe, I however still have a difficulty to understand the subsequently suggested second addition of $\ce{PhMgBr}$ in the lower drawing, because the activation of the double bond once in conjugation with the carbonyl group is gone.

A search of Chemical Abstracts for the OP's reaction of coumarin 5 with phenyl magnesium bromide forming 2,2-diphenyl-2H-chromene had 216 substructure hits but none from coumarin itself. Two typical examples are shown below.1 Suraj S is vindicated! 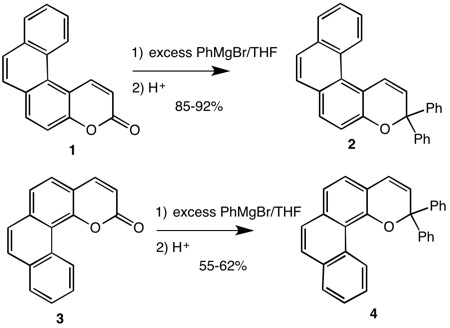 Although the OP's professor's proposed product 10 of the reaction is well-known, a search did not produce its formation from coumarin. There were no substructure hits either. If the reaction mixture were to contain a catalytic amount of cuprous ion and if coumarin behaves in the same fashion as an α, β-unsaturated ketone, conjugate addition would occur to form enolate 6. The enolate may well undergo elimination to afford ketene 7, which, in turn, reacts with phenyl magnesium bromide to provide ketone enolate 8. The professor's proposed displacement of phenoxide by the Grignard reagent at an sp2 center is unwarranted. Workup with water would provide ketone 9 which has been converted to 10 upon acid catalysis. 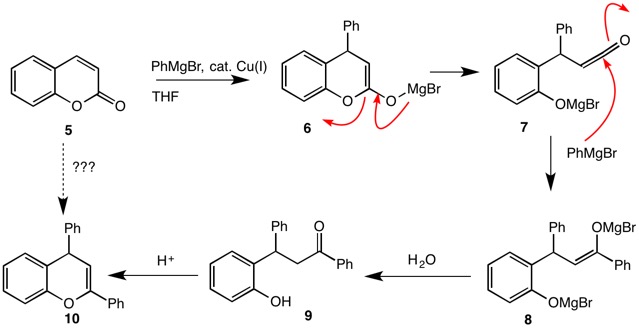 Not the answer you're looking for? Browse other questions tagged organic-chemistry reaction-mechanism carbonyl-compounds heterocyclic-compounds grignard-reagent or ask your own question.

4
What route to take in converting ethanol to crotonic acid?
8
Ketone/aldehyde synthesis from N-acylazetidines or aziridines
8
Reaction of Grignard reagent with primary amines
5
Rearrangement of Grignard reagent formed from exocycloproyl vinyl bromide
1
Why does coumarin predominantly exist in keto form?
4
Method for regioselective hydroalkylation of terminal alkyne
2
Priority order of attack of grignard reagents on functional groups