Dmitri Mendeleev noticed patterns in elements which allowed him to design the periodic table which ultimately led to the modern periodic table.

How were elements organized before this? Was there any method that served as a crude standard?

Although an actual view into his paper permits the speculation he was not using the atom masses we know today; rather than using specific weight and molecular weight as known / defined at his time of oxides of Ca, Ba, Sr, for example:

Aaron J. Ihde's The Development of Modern Chemistry (DMC) has an entire chapter entitled "Classification of the Elements," which includes a very nice overview of the attempts before Mendeleev to bring order to the elements. All quotations below are from Chapter 9 (pp236-243, specifically) of the 1984 Dover edition of DMC, itself "an unabridged, slightly corrected republication of the third printing (1970) of the work originally published by Harper & Row, Publishers, Inc., in 1964" (front matter). The section and sub-section headers are generally those of DMC, with exceptions marked with an asterisk.

It is important to bear in mind when considering some of these systems that the best values of the atomic weights of many elements at the time were incorrect, either (a) due to simple experimental error, or (b) due to systematic misinterpretation of the available data, due to the limited state of knowledge at the time. For example, the best-regarded atomic weights of many elements were one-half the accepted values of today because the values were derived from measurements on compounds whose formulas were erroneous $($e.g., the atomic weight of oxygen was calculated based on experiments with water, which was thought to have the formula $\ce{HO})$.

For interest, a short article on Aaron J. Ihde can be found on the German language Wikipedia.

As already noted by Buttonwood in his answer, Johann Wolfgang Döbereiner appears to have been the first to attempt to systematize the elements, after:

His triads included elements with similar properties, the atomic weight of the central member being the mean of the other two atomic weights.

The Döbereiner triads (some which he was unable to complete at the time) included in DMC (using modern atomic symbols) are:

Magnesium he considered as an isolated element, not part of a triad. Fluorine, as yet undiscovered but its existence clearly known, he did not include in the halogen triad. Although the atomic weight of nitrogen fell exactly between that of carbon and oxygen, Döbereiner regarded the three elements as isolated non-metals rather than as members of a triad. He also treated hydrogen as an isolated element.

Immediate Precursors of the Periodic Table

... conceived the idea of plotting the elements according to atomic weights on the surface of a cylinder. The circumference of the cylinder was divided into sixteen sections since the atomic weight of oxygen was $16$. The elements were plotted on a line or helix that descended at an angle of $45^\circ$ with the top of a cylinder. There was a striking resemblance in elements that were on the same vertical line.

... [H]e observed that atomic weights followed the formula $n+16n'$, the value of $n$ frequently being $7$ or $16$ [noting that none of the noble gases had yet been discovered]. ... Gaps in the helix were considered as indicating not unknown elements but different varieties of known elements. He believed, for example, that there was a form of carbon whose atomic weight was $44$.

In particular, the above Wikipedia article on de Chancourtois emphasizes that he "was the first scientist to see the periodicity of elements when they were arranged in order of their atomic weights." A public domain image of his "Telluric Helix" is also available at the Wikipedia page, and reproduced below (click to enlarge): 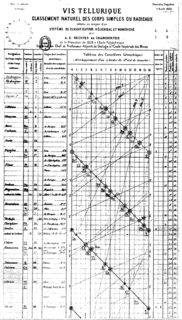 ... was the other major precursor of Mendeleev and Lothar Meyer. ... Newlands' first publication dealing with the classification of the elements appeared in 1863. It was essentially a reworking of Dumas' ideas, for Newlands was looking for numerical relationships between elements. A year later he adopted the atomic weights recommended by Cannizzaro and published a table of 37 elements subdivided into ten families. A crude repetitive character was evident, and blank spaces were left for undiscovered elements. In a table in a subsequent paper he assigned numbers to the elements [precursors to the modern atomic numbers], which were listed in order of increasing atomic weights. He used numbers for the elements in all his work thereafter. In August, 1865, he published an eight-column table listing 62 elements in order of increasing atomic weights; they were subdivided into seven horizontal families. It was in this table that he saw an analogy to the octave in music. The eighth element resembled the first element, the fifteenth resembled the first and the eighth; in other words, an interval of seven elements separated similar elements. Soon afterwards he suggested that the numerical relationships observed by earlier chemists were due to this law of octaves.

Newlands must be credited for taking a pioneering step toward the discovery of the periodic law, for he detected the repetition of properties when elements are arranged according to increasing atomic weights. He noted that this relation was evident only if Cannizzaro's atomic weights were used. he used blank spaces for unknown elements but failed to do this consistently, holding that perhaps the interval between repetitions was eight or nine and that this could be dealt with as new elements were discovered.

As with de Chancourtois, the Wikipedia article on Newlands includes a public domain image of his periodic chart, which is reproduced here for reference:

Not the answer you're looking for? Browse other questions tagged periodic-table history-of-chemistry or ask your own question.

6
Where did the rest of the elements come from?
9
Did Mendeleev predict the existence of neutrinos?
3
According to what criteria was the periodic table of elements ordered?
5
Memorizing polyatomic ions? Using Periodic Table
14
Do non-English speaking countries use the same element symbols?
3
Mendeleev's predictions
4
What is the true depiction of the periodic table?
14
How did Mendeleev know elements from compounds or mixtures?