Why is sodium carbonate less soluble in water than sodium bicarbonate?

Does the difference in solubility have to do with the dipole moment of the molecules? If so, how can it be explained in more detail?

Oops! The question contains an incorrect assumption. But chemists are amazing - they can still answer such a question: 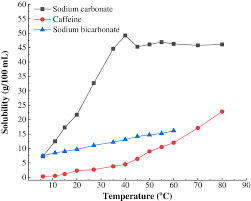 Sodium carbonate is way more soluble than sodium bicarbonate at all temperatures above about freezing. Na2CO3 has several crystalline hydrates that are temperature sensitive and make the curve less smooth than most other salts. (I suppose the caffeine is in there to wake us up.)

Now I'm more puzzled by why Na2CO3 has such a complex hydrate system, and NaHCO3 doesn't!

For an organic compound, one hydrogen bond for each four-five carbons may be enough to make it water soluble.

Not the answer you're looking for? Browse other questions tagged inorganic-chemistry aqueous-solution solubility polarity or ask your own question.

6
Making a saturated solution of Na₂CO₃

13
Why are alcohols with longer chains less polar?
2
Relationship between dipole moment of a molecule and electronegativities of constituent atoms
2
Is butanoic acid more soluble in water than ethyl acetate?
1
Which isomers (cis or trans) are more water soluble?
4
Why does acetone have a greater dipole moment than dimethyl ether?
0
Why is Lithium Chloride (LiCl) soluble in alcohols?
1
Is there a difference between dipole and dipole moment?
5
How can I use the MO diagram of hydrogen fluoride to demonstrate that the molecule is polar?