I found these rearrangements, but I could not understand what the mechanism is behind this.

When I searched on the Internet I found the Wikipedia page Di-pi-methane rearrangement.

This could be due to hydride shift.

In the first image, the pi-bond shifts on the carbon from which $\ce{H}$ is eliminated. As the pi-bond leaves the first carbon, it becomes positively charged due to lose of electron, and the $\ce{H}$ gets converted to $\ce{H^-}$(hydride ion) as it accepts electron. Therefore, it is called hydride shift. It also stabilises the molecule as the resulting molecule is conjugated. The same can be applied for second and third images.

This is for the second image. The third one you can do it yourself. All the resulting molecules are stabilised due to conjugation. 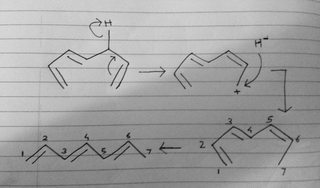 @Mesentery has already proposed a possible mechanism, and @CupC_56 has tried to explain why it might happen. I found @Cup_C56's points to be correct, but the explanation to be quite less than ideal, so to speak, so I'll try to provide an alternative and I hope somewhat more sensible explanation as to why this happens.

It is indeed due to the resonance-stabilization of the conjugated products formed due to the rearrangements you quote. Resonance-stabilized compounds have lower energy than non-resonance stabilized ones, but why is that? One of the possible explanations is that resonance "averages out" energy minima and maxima between the resonating parts of the compound. This "smoothed-out" compound usually has more symmetry - and in most cases, symmetrical configurations are more stable than asymmetrical ones if both are under comparable amounts of steric stress.

The rearrangement is to a conjugated diene because conjugation facilitates resonance - if the $\pi$-bonds are too far apart, the $\pi$-clouds cannot overlap, which is resonance (or electron delocalization over $\pi$-bonds). "Delocalization" quite literally means that the $\pi$-electrons, instead of being associated with a particular bond between 2 atoms of the molecule, are part of an extended $\pi$-cloud over the molecule (an extended molecular orbital formed by the overlap of partially- and fully-occupied molecular orbitals and unoccupied atomic orbitals (near the $\sigma$-bonds) - the premise of Molecular Orbital Theory - please do find the time to read about it!). The overlap probability and extent, which determines the overall stabilization, falls off very quickly with the separation between the overlapping orbitals - usually beyond one bond it is very weak, and beyond 3 it is negligible.

So now you realize why it is favorable for an organic diene system to undergo rearrangement to a conjugated system - the latter is stabilized by $\pi$-cloud overlap, or "resonance".

Are you familiar with delocalization of pi-bonds? Well, if not, i suggest you read about that as it will help you in understanding such mechanisms, and also various other reactions related to Benzene and its homologues.

All the structures which you have depicted in your diagram are conjugated compounds (alternate double and single bonds), and hence the delocalization of pi-bonds becomes fairly easy, as compared to normal unsaturated compounds. Delocalization is basically the breakage of pi-bond at one site, and shift of the electrons to another site (forming a double bond in the process at the same site) in the same molecule.

WHEN conjugated compounds exist, the delocalization is easier because the intermediate complexes formed are quite stable, and hence lower energy is required for the breaking of such pi-bonds. (I strongly suggest you read more about stability of conjugated compounds as it is too broad a topic to be mentioned here).

NOTE: Not all compounds in your diagram are conjugated ones. To be more specific, the product of each reaction is.

This is one more clue as to why conjugated compounds are more stable. These reactions obviously proceed to form such products which are more stable than the reactants.

48
What is resonance, and are resonance structures real?