When discussing pericyclic reactions, the Woodward-Hoffman rules allow one to predict whether a reaction will be thermally/photochemically allowed. This has been discussed in many questions on chem.SE, but essentially boils down to the following statement:

What the Woodward-Hoffman rules fail to explain however is why the reaction is allowed. Several explanations exist, such as the Huckel aromaticity of the transition states, however by far the most 'powerful' explanation is supposedly given by a well drawn orbital correlation diagram. Fleming devotes an entire section in his book on the topic of how to draw these diagrams: 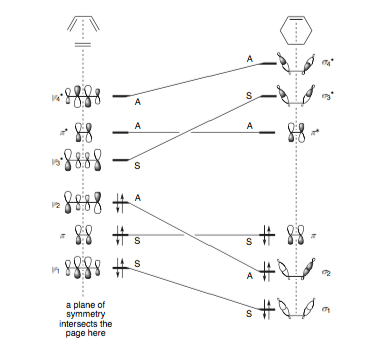 As far as I can find, and from recollection, Longuet-Higgins at Cambridge was the first person to use correlation diagrams to explain pericyclic processes (as per figure 2 below), but again, there's no explanation as to why this works.

Instead of the usual cycloadditions (which has some extra complications in terms of the reacting orbitals), let's consider the concerted reaction $\ce{H2 + D2 -> 2HD}$. We'll come back to the cycloadditions at the end.

occurring via a square planar transition state. This can be analysed with the W–H rules and you'll find that it's a thermally forbidden process $(_\sigma 2_\mathrm{s} + {}_\sigma 2_\mathrm{s})$. So, hopefully that's what we find at the end of this discussion.

The relevant MOs will be constructed from linear combinations of the 1s orbitals on each atom. First, we look at the orbitals of the reactants, labelled $\psi_1$ through $\psi_4$. We will overlap the 1s orbitals on adjacent atoms to produce $\sigma$ and $\sigma^*$ orbitals for both $\ce{H2}$ and $\ce{D2}$. However, since these MOs do not have definite symmetry under all the mirror planes, we need to take linear combinations of these MOs. 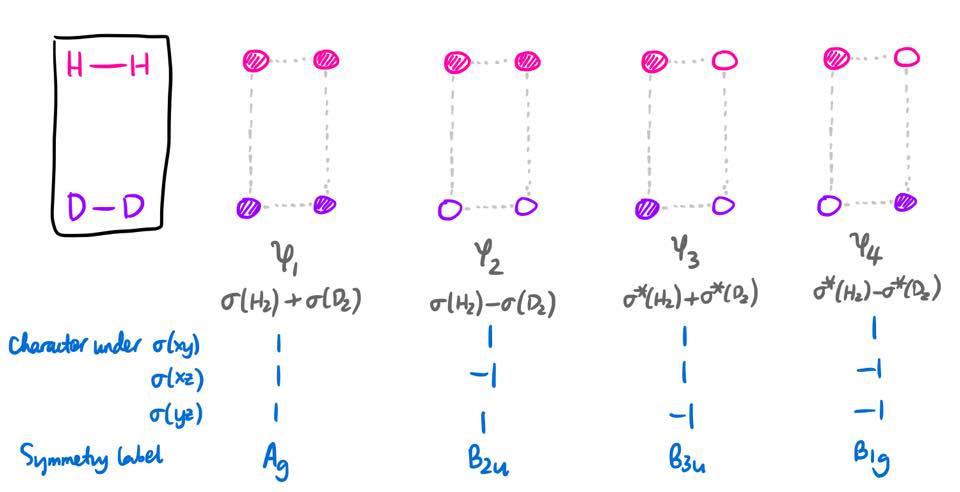 Hopefully the energy ordering of these MOs is clear (I actually listed them in increasing order of energy). It can be deduced from the extent of antibonding/bonding character between each pair of 1s orbitals.

The product MOs, labelled with $\phi_1$ through $\phi_4$, have a very similar form. It should not really be surprising, as the system is exactly the same, just rotated 90 degrees.

We can define a reaction coordinate $x$, such that $x = 0$ before the reaction (i.e. reactants) and $x = 1$ after the reaction (i.e. products). Over the course of the reaction, there will always be four MOs; and these four MOs will always transform as $\mathrm{A_g + B_{1g} + B_{2u} + B_{3u}}$, regardless of what the value of $x$ is. This has to be the case because the basis set (four 1s orbitals) transforms as a representation which can be reduced into that sum.

In theory, one could find the MOs and their energies at every value of $x$, and then you would find four curves, one for each $i$. However, for a qualitative understanding, this isn't necessary. We already know the approximate values of $\varepsilon_i(0)$ and $\varepsilon_i(1)$, and we also know the MOs to which these values correspond. So all we need to do is to figure out which reactant MO $\psi_i$ correlates with which product MO $\phi_j$.

In this example, it also makes physical sense that as the reaction proceeds, the reactant MO $\psi_2$ will simply become the product MO $\phi_3$ (pictured above). For other correlation diagrams, there is a subtlety, but it is a point we will return to later on.

Orbital correlation diagrams are all fine and dandy, but they can be put on a much more solid footing by constructing the relevant state correlation diagrams. I have deliberately avoided using the word "state" up until now. Here, "state" refers to an electronic state of the system as a whole.4 The simplest expression for an electronic state is given by a Slater determinant, and we will simply abbreviate it to the usual form that the organic chemists do. For example, in the ground state of the reactants, we can write

where the antisymmetrisation is implicit. The use of capital $\Psi$ instead of small $\psi$ emphasises that this is a total electronic state of a system. The subscript 1 indicates that it is the ground state.

The electronic states of the reactants are well-described by single Slater determinants. For a system with 4 MOs and 4 electrons, there are a total of $8!/4!4! = 70$ states, and so theoretically we need to look at $\Psi_1$ through $\Psi_{70}$. However, it suffices to consider the first three singlet states (the triplet states can be ignored5). These are

The state correlation diagram plots the energies of these states $E_i$ as they vary with the reaction coordinate $x$, so the question is again: which reactant state $\Psi_i$ correlates with which product state $\Phi_j$.

Let's first make the assumption that a single Slater determinant is sufficient to describe an electronic state, throughout the entire reaction coordinate. In this case, the assignment is very straightforward. Since $\psi_1$ and $\psi_2$ in the reactants smoothly become $\phi_1$ and $\phi_3$, it means that the reactant state $\Psi_1 = \psi_1^2\psi_2^2$ must smoothly become the product state $\Phi_3 = \phi_1^2\phi_3^2$ as the reaction coordinate increases. A similar consideration for the other states leads to the diagram below. 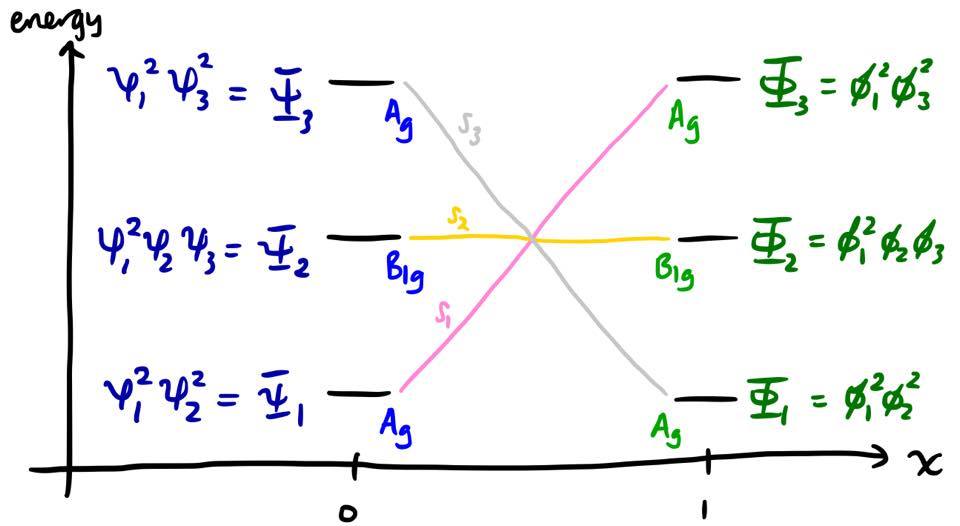 Now, we introduce the key assumption that the reaction must proceed adiabatically. This can be formalised very thoroughly in quantum mechanics, but essentially, it means that the state of the system cannot jump from one curve $S_i$ to another curve $S_{j \neq i}$. I'm not entirely sure about the justification for this, but Patterson has written about it in an article:7

A W–H allowed reaction pathway conserves R (reactant) and P (product) nodal geometries, which in turn guarantees continuous covalent bonding along an adiabatic reaction pathway that takes the reactants through a transition state and on into products. A W–H forbidden pathway can either maintain this continuous bonding (interaction energy between R and P) along an adiabatic pathway and generate products in excited electronic states, or disrupt reactant nodal geometry or bonding to reach diabatically (or nonadiabatically) a lower-energy pathway to products. [...] Continuous bonding is energetically more favorable than either nonbonding or antibonding interactions.

That gave us the correct result, but not for the correct reason. The problem is that this assumes that there is no interaction between $S_1$ and other states $S_n$. Mathematically speaking, this means that in the basis $\{S_1, S_2, S_3\}$ the Hamiltonian is assumed to be diagonal,8 such that

The question is, is this true? It turns out that, because the Hamiltonian transforms as the totally symmetric irreducible representation (TSIR), the matrix elements $H_{ij} = \langle S_i | \hat{H} | S_j \rangle$ generally only vanish if $S_i$ and $S_j$ are of different symmetry. Therefore, if two states $S_i$ and $S_j$ have the same symmetry, there will often be an off-diagonal element $H_{ij}$. This is the case with $S_1$ and $S_3$ in our example above.

So much for the states; we're not really all that interested in them. The energies are more valuable. It turns out that the presence of this off-diagonal element leads to the non-crossing rule:9 two curves corresponding to states of the same symmetry cannot cross each other. Instead, they are repelled, and there is said to be an avoided crossing. The repulsion is most pronounced when the energies are close to each other, i.e. near the middle of the diagram. The state correlation diagram must be modified to reflect this. The coefficients $a$ and $b$ in the linear combinations must fulfil the criterion $|a|^2 + |b|^2 = 1$. 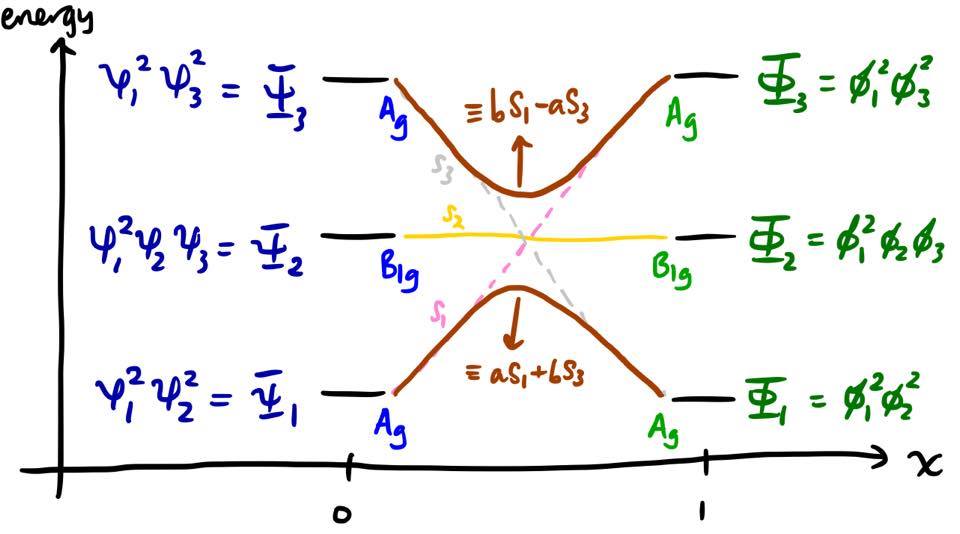 Within this framework, we can refine our argument for why the reaction is forbidden. In fact, the transition from $\Psi_1$ (reactant ground state) to $\Phi_1$ (product ground state) is adiabatic; however, there is an extremely large electronic activation energy to it, on the order of an electronic excitation energy, which cannot be provided by thermal means. 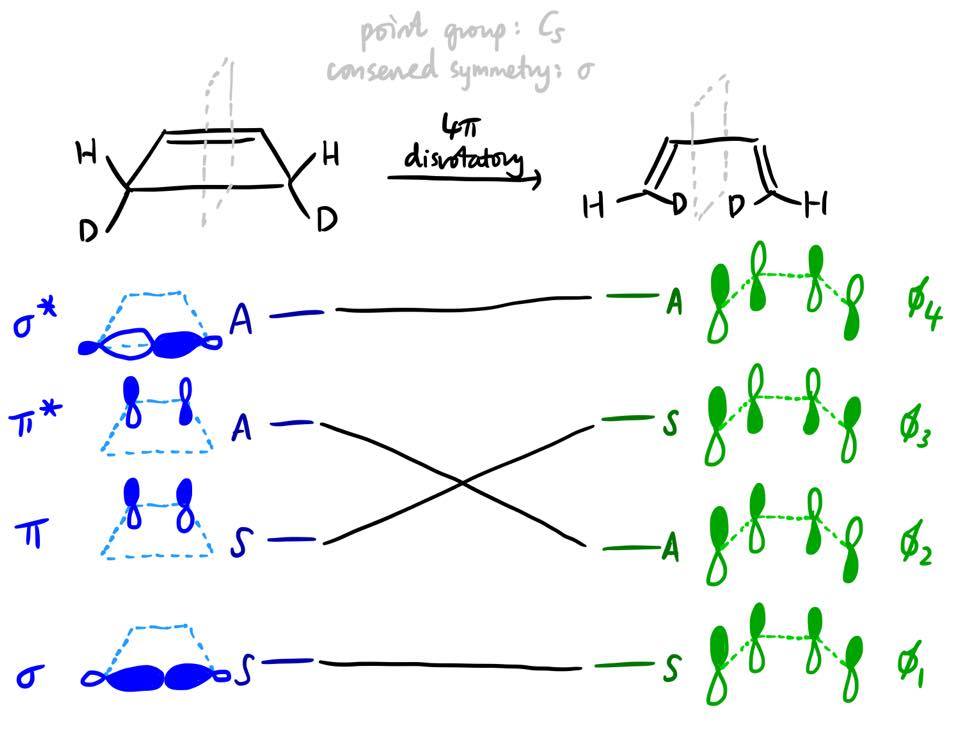 Unlike in our first example, there is no obvious one-to-one correspondence between the form of the reactant MOs and the form of the product MOs. For example, it's not obvious why $\pi$ has to transform into $\phi_3$ and not $\phi_1$. It turns out that both $\phi_1$ and $\phi_3$ are actually linear combinations of what $\pi$ and $\sigma$ become in the new geometry.

In the reactant, cyclobutene, the $\pi$ and $\sigma$ MOs cannot mix by symmetry: there is an additional mirror plane (the plane in which the molecule lies), and $\pi$ is antisymmetric and $\sigma$ symmetric with respect to that mirror plane. However, when the reaction proceeds, the symmetry of the system is decreased, and these orbitals are allowed to mix and form linear combinations.

In our earlier example of $\ce{H2 + D2 -> HD + HD}$, the reactant MO $\psi_2$ does physically become the product MO $\phi_3$, as was fairly obvious from the nodal pattern. However, in this situation where there is orbital mixing, it cannot be said that the $\pi$ orbital physically becomes $\phi_3$ as the reaction proceeds. This point was emphasised by Patterson7 and was also described by Woodward and Hoffmann10 in their review of their rules (pp 797 onwards).

So, the correspondence should be determined using symmetry and the non-crossing rule (which also applies to MOs), without recourse to the form of the MOs.

Another example is that of the Diels–Alder reaction. If you look at the $\pi$ MO of ethylene (the second-lowest reactant MO), you find that it becomes the $\pi$ MO of the product cyclohexene. It makes no physical sense to claim that somehow the MO migrated through several carbons over the course of the reaction. Instead, it is more accurate to say that the three symmetric product MOs are linear combinations of what the three symmetric reactant MOs become over the course of the reaction.

Not the answer you're looking for? Browse other questions tagged organic-chemistry reference-request symmetry pericyclic or ask your own question.

5
Photochemical cycloaddition of ethene
4
When is donation into an anti-bonding MO stabilising?
5
How do bonds rotate in pericyclic reactions?