Why don't electrons simply stick to the nucleus on account of being *oppositely* charged, instead of moving around it?

Why don't electrons stick to the nucleus on account of being oppositely charged charged (the nucleus being positively charged)? But contrary to my intuition, electrons seem to follow a whole bunch of wacky paths (orbitals) around the nucleus (as demarcated by orbital wave-functions). Why is this?

I'm not asking "What keeps the electron in orbit". All I want to know, is why electrons don't simply find themselves attached to the nucleus, and why do they even bother moving around the nucleus (in orbitals) at all? My textbooks, unfortunately, make no reference to this issue...they wholeheartedly adopt the "current" QM model of the (hydrogen) atom.

physical-chemistry atoms
Share
Improve this question
edited May 11 '17 at 12:08

Richard Feynman alludes to this exact problem in the first volume of the Feynman Lectures on Physics. I'll present his argument here (based on the Uncertainty Principle), albeit, in my own words ;)

The German physicist [since he dealt with atomic chemistry/physics...by all means, go ahead and call him a "chemist" ;) ], Werner Karl Heisenberg came up with what we now know as "The Heisenberg Uncertainty Principle"... a revolutionary idea that points to an "inherent fuzziness", that exists within quantum systems (which is a fancy word that refers to any region of space that is sufficiently "small" enough to introduce wave-particle duality), and becomes apparent when we try to "measure" the various parameters that constitute them.

Basically, what (one version of) the Uncertainty Principle states is that:

You cannot know both a particle's position and momentum in a quantum system to a great precision simultaneously.

Here's a good analogy for this (Part 3: Atomic Structure - Analogy with a ballon)

From this point on, I guess the question can best be dealt with by "proof by contradiction".

First part of the question: Why don't electrons stick to the nucleus?

We know for a fact, that Heisenberg's Uncertainty Principle holds true (yeah, I didn't prove it...but for now, just take my word for it).

So, let's assume that electrons do stick to the nuclei of their respective atoms. In that event, we would know the electrons' positions and momenta (with respect to the nucleus) with almost absolute certainty...something that Heisenberg's Uncertainty Principle does not allow.

Seeing that this situation is impossible, it is obvious that our little "assumption" must be wrong (Knowing the the Uncertainty principle is indeed, correct).

Second part of the question: Why do electrons follow a whole bunch of wacky paths?

The Dane, Niels Bohr postulated that electrons move in certain, fixed orbits around a nucleus...a fairly convincing (but not very accurate) model that is still often brought up in high-school and under-grad physics and chemistry courses. The Bohr Model was developed before the Uncertainty Principle.

But electrons do not move in fixed orbits ...the Uncertainty Principle triumphs again!

So if electrons don't stick to the nucleus, and if they don't move in fixed orbits around the nucleus, then where exactly are they?

We can never exactly point out an electron's position in an atom. However, we can determine the probability of finding electrons in a given region of space around the nucleus. These regions of space with a very high electron probability density are called orbitals.

This answer has been greatly over-simplified. Thought it does deal with the gist of the topic, I'm personally looking forward to seeing more detailed answers myself.

The planetary view of a a small electron orbiting a nucleus does indeed not give a satisfactory explanation; Bohr simply postulated stable orbits in his original model.

In QM, you could argue that the bound electron is the wave function [1], and therefore much larger than the nucleus, despite being much lighter. The closest thing to sticking together in this view is for the nucleus to settle in the center of that electron wave function.

For a more deterministic picture you might adopt Mills' view [2] which suggests the bound electron is a spinning charge distribution (orbitsphere) which completely encompasses the nucleus — think something like a soap bubble around a grain of salt. Angular momentum is an inalienable property of this electron, with or without a nucleus at its core; i.e. it is not so much that the electron ‘bothers’ to move around the nucleus, but rather it spins around its own axis all the time. (The size of a free electron in this model is the De Broglie wavelength, making it indistinguishable from a point-charge at high energies.)

This is only a comment on the answer by Pallas, which I upvoted: 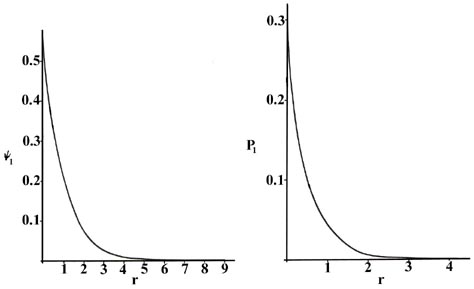 Fig. 3-4. The wave function and probability distribution as functions of r for the n = 1 level of the H atom. The functions and the radius r are in atomic units https://www.chemistry.mcmaster.ca/esam/Chapter_3/section_2.html

I visualize the electron as a ball of cotton candy (spun sugar), which is not a point, and which, as Pallas says, simply surrounds the nucleus. So the electron does, in fact, stick to the nucleus, as good as it can! An s-electron has a high probability of touching the nucleus. The only way to get closer would be to become a neutron - oops, but neutrons have a half-life of only about 15 minutes before decaying back to a proton and electron.

So the cotton ball with the nucleus in the middle is sticking, not travelling around. And maybe the uncertainty principle plays some part in why the electron isn't a point charge.

But I wonder why the electron is a trinity of charge: that is, why does it take the charge of 3 quarks to equal the charge of one electron? Surely, the lowest charge (a quark) must be the elementary unit. Mulliken would have agreed (I think).

To add to the plethora of recent answers: it's not that the electron cannot "crash" into the nucleus, it certainly can, the likelihood depending on the isotope in question. The process of fusion of proton and electron to form a neutron is called electron capture. None other than Luis Alvarez studied such processes early in his career. You might find people more knowledgeable on the subject over at physics SE.

A simplified explanation would be to think about a balance between minimising potential and kinetic energy. While an electron sticking to the nucleus would decrease potential energy due to electrostatic attraction, the spiked and extremely localised wave function would be high in kinetic energy (correlated with the curvature of the wavefunction). I do understand that this is a simplified view but I believe it is a neat explanation.

21
Derivation of the Heisenberg uncertainty principle