In the introductory chapter, Atoms in Motion, of the Feynman Lectures on Physics (Volume One), Feynman alludes to a certain "physical method", which can be used to determine the structure of α-irone (and presumably) many other complex organic compounds. 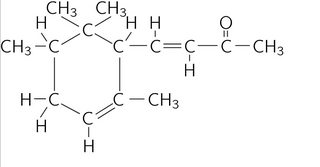 How does the chemist find what the arrangement is? He mixes bottles full of stuff together, and if it turns red, it tells him that it consists of one hydrogen and two carbons tied on here; if it turns blue, on the other hand, that is not the way it is at all.

This is one of the most fantastic pieces of detective work that has ever been done—organic chemistry.

To discover the arrangement of the atoms in these enormously complicated arrays the chemist looks at what happens when he mixes two different substances together. The physicist could never quite believe that the chemist knew what he was talking about when he described the arrangement of the atoms. For about twenty years it has been possible, in some cases, to look at such molecules (not quite as complicated as this one, but some which contain parts of it) by a physical method, and it has been possible to locate every atom, not by looking at colors, but by measuring where they are. And lo and behold!, the chemists are almost always correct.

Knowing that this lecture was originally delivered in the early 1960s, what is this "physical method" Feynman's referring to and how does it work?

physical-chemistry molecular-structure history-of-chemistry
Share
Improve this question
edited May 11 at 11:30

While it is probably impossible to figure out exactly what Feynman was referring to, it is possible to contemplate what was available (and most valuable as a day-to-day structural method) to an organic chemist in the 1940s-1960s. Also, there is some additional information related to the size of the molecule:

For about twenty years it has been possible, in some cases, to look at such molecules (not quite as complicated as this one, but some which contain parts of it) by a physical method, and it has been possible to locate every atom, not by looking at colors, but by measuring where they are.

The molecule he references is alpha-irone, which contains 14 carbon atoms. In the second part of the sentence, Feynman talks of locating atoms by measuring where they are. This has to be a diffraction technique (today, it could be AFM as well). On the other hand, X-ray crystallography was sufficiently developed to tackle molecules like vitamin B12 (cobalamin, contains 63 carbons), which Dorothy Hodgkin determined and received the Noble prize for in 1964. It is possible that the two parts of the sentence refer to two different techniques.

The first commercial NMR came out in 1952, a 30 MHz instrument from Varian. This might be a little bit late for the timeline here. It would be difficult to figure out the structure of alpha irone based on proton NMR alone.

A low-cost IR-spectrophotometer came out in 1957. Because these instruments are cheaper than NMR, an organic chemist would be more likely to have one in the lab, monitoring reactions, while the NMR might be in a central facility.

Mass spectrometry is an older technique which started to be applied to natural products in the 1960's. However, alpha-irone probably does not exceed size limitations, and seems sufficiently volatile to be a good mass spec molecule.

Hauptman and Karle developed direct methods in the 1950s, allowing to solve crystal structures to up to about 1000 atoms. It is likely that at least the second part of Feynman's remarks refer to X-ray crystallography as this is the only method among those above that directly locates atomic positions (rather than infering which atom binds to which other atom).

Not the answer you're looking for? Browse other questions tagged physical-chemistry molecular-structure history-of-chemistry or ask your own question.

5
What stable arrangements of hydrogen-bonded water exist in the range of 4-20 water molecules?
1
Is matter really divided in two categories?
6
What is the exact definition of the radial distribution function?
1
How can I model cellular membranes in terms of topology?
2
Clarification of term symbol explanation of laser crystal doping from textbook