Recent studies on radical-induced cyclisation reactions have led to a simple, one-step method for the preparation of hydroazulenes from appropriately substituted cyclopentanone precursors. Treatment of 1, for example, with triphenyltin hydride and AIBN in refluxing toluene gave 2 in 79% yield. Give a mechanism for this transformation. (TES = triethylsilyl, SiEt3)

I know that triphenyltin hydride, Ph3SnH, can act as a reducing agent but I have no idea of its reduction mechanism. And I know that AIBN is a radical initiator:

The given conditions strongly suggest a radical pathway. However, looking at the product I also feel like there is a carbocation intermediate, as there is a ring expansion, but I don't know whether or how that happens.

The heat (provided by refluxing) is required to initiate the reaction by the decomposition pathway you have drawn. The cyanopropyl radical thus formed abstracts a hydrogen atom from the tin hydride, a consequence of the weak Sn–H bond:

The triphenylstannyl radical is the one that actually does interesting chemistry. Generally, there are a few options for radicals at this stage. One common pathway is to abstract a halide or chalcogenide from the starting material, but there is no such atom here (C–F and C–O bonds are stronger and rarely broken, so the OTES group is out of bounds). The other common pathway is to add to a π-bond. In this case the best place to add is the terminal carbon of the alkyne, which is least sterically hindered.

After this, the remainder is a series of addition-elimination steps. Note that in each case the ring size formed is 3, 5, or 6: these are all kinetically fast cyclisations.

In particular, note that:

The original paper supports this mechanism (although they skipped some steps, as is usual in journals): 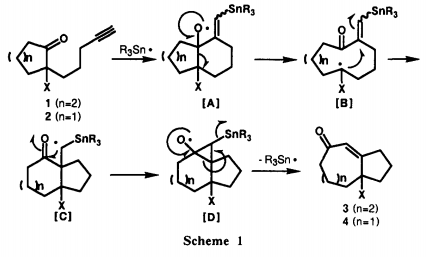 Not the answer you're looking for? Browse other questions tagged organic-chemistry reaction-mechanism carbonyl-compounds radicals or ask your own question.

5
Photolysis of N-bromo compound in acidic conditions (radical cyclisation)
7
Mechanism of a cyclization reaction - why does an enol ether form?
5
Cyclisation reaction through hydrazine
5
Why is a 7-endo radical cyclisation favoured over a 6-exo in this synthesis?
0
Reaction Mechanism for a radical ring opening
3
Mechanism of cyclisation with tin(IV) chloride
1
Why do radical inhibitors inhibit a reaction by creating a "more stable" radical, but for monohalogenation, we WANT to form the most stable radical?