It is observed that whereas singlet oxygen is required for an ene reaction with an alkene to give an allyic hydroperoxide, triplet oxygen will react similarly with an enol to give an alpha-hydroperoxy aldehyde. (Example: see Chen HJ et al., Tetrahedron 69 (2013), 1112-1114.)

The drawing below shows two steps in the final sequence of reactions leading to the antimalaria drug artemisinin, as described in the cited article. The enol is formed by opening of the hemiacetal, and before it can tautomerize to the aldehyde, it reacts with atmospheric oxygen (in the dark, so presumably triplet oxygen) to give the alpha-hydroperoxy aldehyde shown. That in turn spontaneously folds up to give artemisinin (not shown). A concerted reaction of the enol with triplet oxygen, if it is a variant of the ene reaction, would be spin-forbidden.

Can anyone explain why this otherwise "forbidden" reaction works?

I offer the following thoughts on the paper you cite regarding the formation of artemisinin 9 from carboxylic acid 1. You are correct that the allylic hydroperoxide 2 is formed by an ene reaction with singlet oxygen (1O2). The stereochemistry of the hydroperoxide group is the result of the ene reaction occurring on the convex face of the unsaturated cis-decalin 1. The crude hydroperoxide 2 was exposed to an atmosphere of triplet oxygen (3O2) in a vigorously stirred mixture of petroleum ether and catalytic trifluoroacetic acid. The initial steps are 2 --> 6 via radicals 3, 4 and 5. Triplet oxygen forms hydroperoxide radical 3 which undergoes cyclization to 1,2-dioxetanyl radical 4. It is likely that radical 4 reacts with triplet oxygen prior to dioxetane fragmentation owing to the stereochemistry of the hydroperoxy radical in 5. The chain reaction is completed by the reaction of radical 5 with hydroperoxide 2. In the transformation 2 --> 3 the radical HOO was formed and can also intercede as a source of a hydrogen atom regenerating oxygen. Finally, acid-catalyzed cyclization of 6 leads to artemisinin (qinghaosu) 9. There is no issue of "forbidden" reactions. 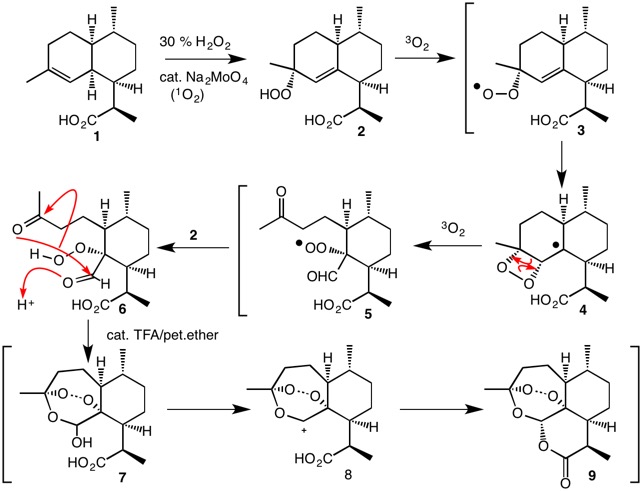 Not the answer you're looking for? Browse other questions tagged organic-chemistry experimental-chemistry electronic-configuration or ask your own question.

1
Oxygen Preventing the Formation of Large Organic Compounds?
12
What is the role of NaHSO3 in syn diol formation from alkenes with OsO4?
14
Singlet/triplet oxygen cycloadditions
17
Orbital correlation diagram for the cleavage of cyclopropylmethylene carbene
22
Is carbonyl-enol tautomerization only intermolecular or can it be intramolecular?
19
Multiplet shape in proton NMR of morpholines
0
Singlet or triplet carbene
3
Role of NaI in Formation of Silyl Enol Ethers using Chloro(trimethyl)silane