Why would rinsing the flask with acid in this experiment affect its accuracy?

The following question is #21 from this test form (PDF link):

The apparatus in Figure 4 was set up to measure the time taken for $\pu{20.0 cm3}$ of sodium thiosulfate solution to react with $\pu{5.0 cm3}$ of hydrochloric acid in a $\pu{100 cm3}$ conical flask at $\pu{20 °C}$. The timer was started when the sodium thiosulfate solution was added to the acid in the flask. The timer was stopped when it was no longer possible to see the cross on the paper. 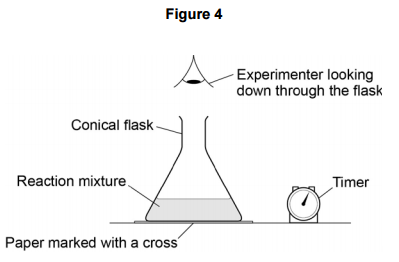 What is likely to decrease the accuracy of the experiment? [1 mark]

A) Rinsing the flask with acid before each new experiment.

B) Stirring the solution throughout each experiment.

C) Using the same piece of paper for each experiment.

The answer given as correct is (A). Why is rinsing the conical flask with acid likely to decrease the accuracy of the experiment? I would imagine that stirring the solution, option (B), introduces error since the rate of stirring is difficult to control.

Probably because the use of hydrochloric acid (which is a reactant involved in this reaction!) could result in some residual aqueous HCl in the flask, which may add to the HCl added later. Anything you use to clean the flask should be inert/not involved in that reaction. If you really want to use HCl, then you should later wash the flask with a lot of water, but that's not said in the answer.

Also note that the volumes involved here are not so large (only 5 ml of HCl are used), so a "small" residue might have a large effect on the result.

As for the stirring, the colour of the reaction is caused by the sulfur precipitate. But I think that, if you stir in each experiment, the times might probably decrease, but you would still observe a trend with temperatures.

That answer would be wrong if it involved stirring in some experiments and not in others.

12
How do I calculate the concentration of sulphuric acid by a titration experiment with sodium hydroxide?
9
Belousov-Zhabotinsky reaction: questions about rate determining step, k and activation energy
1
How does changing volume affect concentration of solutions?
5
Role of hydrochloric acid and sodium hydroxide in isolation of citric acid from lemon juice
6
Deriving the equation for oxygen estimation by Winkler’s method
0
Transesterification of vegetable oils to produce biofuels - problems in the lab
0
Unusual Result in Kinetics Lab
0
How to change pH of CuSO4?