What is the mathematical basis behind the Jahn-Teller effect?

Both first-order and second-order Jahn-Teller distortions play a very important role in chemistry.

It is often said that the Jahn-Teller effect is based on symmetry arguments, and hence nothing can be said about the extent or the exact form of the distortion.

What are these "symmetry arguments", and how can they be derived?

As already mentioned, the Jahn–Teller effect has its roots in group theory. The essence of the argument is that the energy of the compound is stabilised upon distortion to a lower-symmetry point group. This distortion may be considered to be a normal mode of vibration, with the corresponding vibrational coordinate $q$ labelling the "extent of distortion". There is one condition on the vibrational mode: it cannot transform as the totally symmetric irreducible representation of the molecular point group, as such a vibrational mode cannot bring about any distortion in the molecular geometry (it may lead to a change in equilibrium bond length, but not in the shape of the molecule). $\require{begingroup} \begingroup \newcommand{\En}[1]{E_n^{(#1)}} \newcommand{\ket}[1]{| #1 \rangle} \newcommand{\n}[1]{n^{(#1)}} \newcommand{\md}[0]{\mathrm{d}} \newcommand{\odiff}[2]{\frac{\md #1}{\md #2}}$

In the undistorted geometry (i.e. $q = 0$), the electronic Hamiltonian is denoted $H_0$. The corresponding unperturbed electronic wavefunction is $\ket{\n{0}}$, and the electronic energy is $\En{0}$. We therefore have

Here, the Hamiltonian, wavefunction, and energy are all functions of $q$. We can expand them as Taylor series about $q = 0$:

In the new geometry (i.e. $q \neq 0$), the Schrodinger equation must still be obeyed and therefore

By substituting in equations $(2)$ through $(4)$ into equation $(5)$, one can compare coefficients of $q$ to reach the results:

The derivation of equations $(6)$ and $(7)$ will not be discussed further here.1

In order for there to be a first-order Jahn–Teller distortion, we therefore require that

Within group theory, the condition for the integral to be nonzero is that the integrand must contain a component that transforms as the totally symmetric irreducible representation (TSIR). Mathematically,

We can simplify this slightly by noting that the Hamiltonian, $H$, itself transforms as the TSIR. Therefore, $\md H/\md q$ transforms as $\Gamma_q$, and the requirement is that

In a rather inelegant article,3 Hermann Jahn and Edward Teller worked out the direct products for every important point group and found that:

stability and degeneracy are not possible simultaneously unless the molecule is a linear one...

In other words, if a non-linear molecule has a degenerate ground state, then it is susceptible towards a (first-order) Jahn–Teller distortion.

Take, for example, octahedral $\ce{Cu^2+}$. This has a $\mathrm{^2E_g}$ term symbol (see this question) - which is doubly degenerate. The symmetric direct product $\mathrm{E_g \otimes E_g = A_{1g} \oplus E_g}$. Therefore, if we have a vibrational mode of symmetry $\mathrm{E_g}$, then distortion along this vibrational coordinate will occur to give a more stable compound. Recall that the vibrational mode cannot transform as the TSIR, so we can neglect the $\mathrm{A_{1g}}$ term.

What does an $\mathrm{e_g}$ vibrational mode look like? Here is a diagram:4 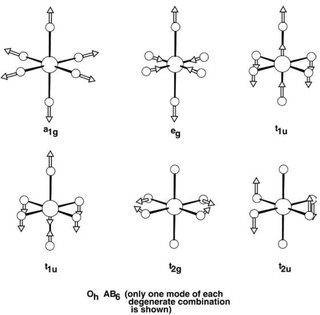 It's an axial elongation, which happens to match what we know of Cu(II). However, there is a catch. The vibrational mode is doubly degenerate (the other $\mathrm{e_g}$ mode is not shown), and any linear combination of these two degenerate vibrational modes also transforms as $\mathrm{e_g}$. Therefore, the exact form of the distortion can be any linear combination of these two degenerate modes. It can also involve negative coefficients, i.e. it might feature axial compression instead of elongation; there is no way to find that out using arguments purely based on symmetry.

Therefore, in this case, it is simply a coincidence that the $\mathrm{e_g}$ mode displayed is exactly the same as the form of the distortion seen in Cu(II). Nevertheless, it is encouraging to see that the axial elongation indeed transforms as $\mathrm{e_g}$ - which lends credence to the group theoretical analysis above.

On top of that, there's also no indication of how much distortion there is. That depends on (amongst other things) the value of $\En{1}$, and all we have said is that it is nonzero - we have not said how large it is.

This is what is meant by "impossible to predict the extent or the exact form of the distortion".

Pearson has written an article on second-order Jahn–Teller effects.5

For the second-order term, the energy correction is of the form

The second-order correction to the energy comprises two terms. The first term, $\left<\n{0}|(\md^2 H/\md q^2)|\n{0}\right>$, is always positive. (The proof of this is left to the reader. Hint: use the fact that $\md H/\md q$ is hermitian.) It may be interpreted as a restoring force that tries to bring the nuclei back to their original positions, and it is related to the fact that if the electronic state remains unperturbed (i.e. $\ket{n} = \ket{\n{0}}$), the unperturbed nuclear positions represent the most stable nuclear configuration.

The second term has the form

which may seem like a slight monstrosity, but it is actually much easier to analyse than it looks. The summation over $m$ indicates that we are going to count every single electronic state $\ket{m}$ that is not the ground state $\ket{n}$. Since the numerator is a square modulus, it is either zero or positive, and since $\En{0} < E_m^{(0)}$, the denominator is always negative; therefore, this term is necessarily either zero or negative.

If $\En{2}$ is to be negative, then we need the second term to dominate the first. For this to occur, there are two prerequisites:

In undistorted $O_\mathrm{h}$ symmetry, $\ce{Hg^2+}$ has a closed-shell $\mathrm{d^{10}}$ configuration and therefore its electronic ground state is $\Gamma_n = \mathrm{A_{1g}}$. However, upon excitation of one electron from the 5d orbitals (specifically the $\mathrm{e_g}$ set) to the 6s orbital (which transforms as $\mathrm{a_{1g}}$), the term symbol changes to

Therefore, a vibrational mode transforming as $\mathrm{E_g}$ will facilitate a second-order distortion, since

contains the TSIR. Again, there is no way of knowing the exact form or the extent of the distortion; we only know that it transforms as $\mathrm{E_g}$. In the case of Hg(II), the distortion is manifested as an axial compression to give a "2 short, 4 long" coordination geometry, which is often described as "linear".

A second factor that favours the distortion is the extremely small 5d–6s gap in mercury, due to relativistic 5d destabilisation and 6s stabilisation. To see the importance of the small $\Delta E$, consider $\ce{Zn^2+}$, which has a larger 3d–4s gap; linear Zn(II) compounds are rare, while linear Hg(II) compounds are the norm.

Most of the time, the relevant excited state $\ket{m}$ arises from promotion of an electron from the HOMO to the LUMO. It is easy to show that if this is the case,

The second-order Jahn–Teller distortion can then be viewed as a reduction in symmetry, such that the HOMO and the LUMO, which transformed as different irreps in the undistorted geometry, now transform as the same irrep and therefore mix with each other. In the case of $\ce{Hg^2+}$: 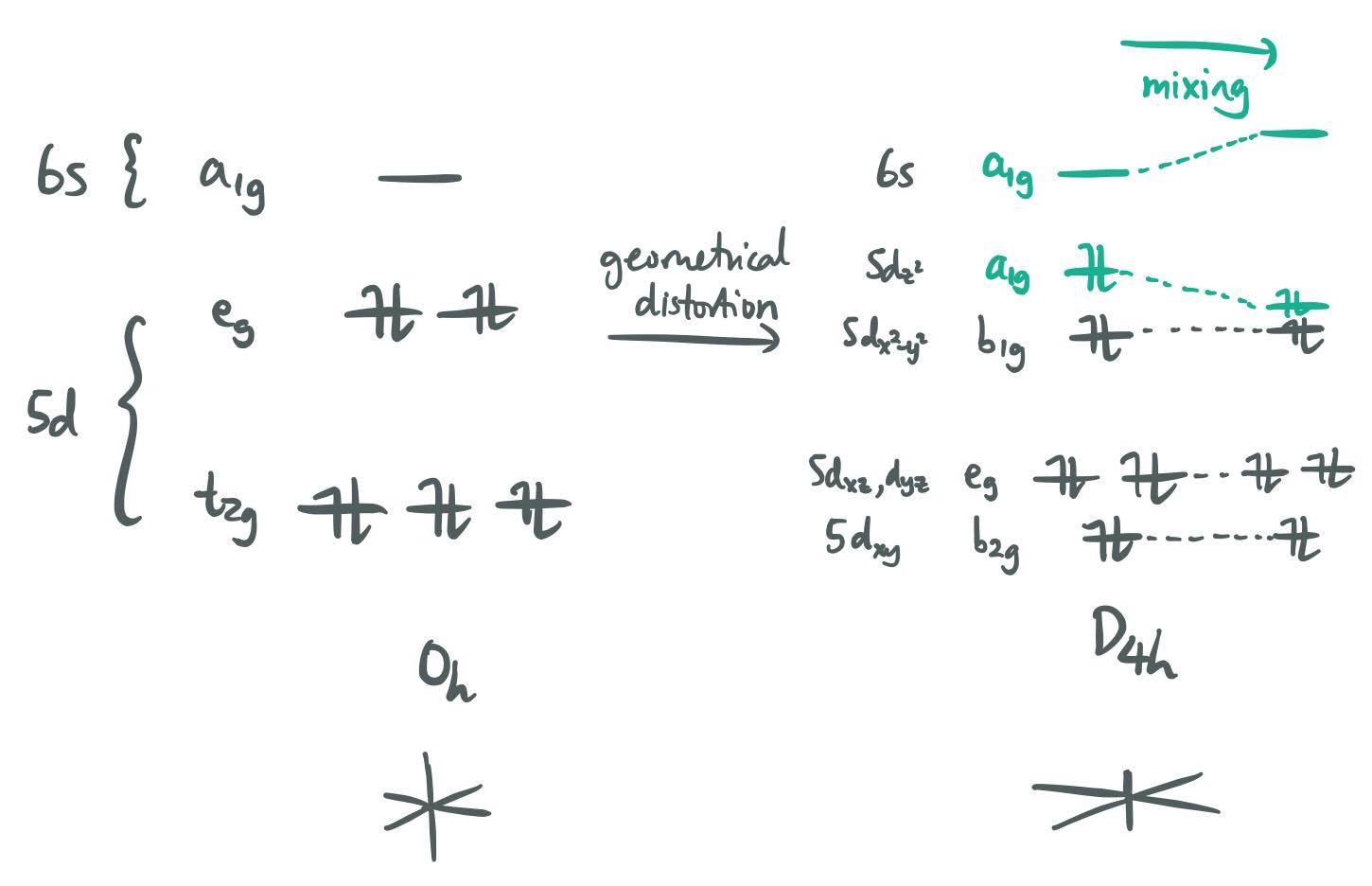 This interpretation using the symmetry of individual orbitals, however, only works when the relevant excited state $\ket{m}$ is derived by excitation of an electron! In some (admittedly very rare) cases, it is possible that both $\ket{n}$ and $\ket{m}$ are derived from the same electronic configuration. This is the case for cyclobutadiene, and the Jahn–Teller effect in cyclobutadiene cannot be rationalised using orbital mixing. $\endgroup$

(1) For more details, look up perturbation theory in your quantum mechanics book of choice. In such treatments, the perturbation is usually formulated slightly differently: e.g. $H$ is taken as $H_0 + \lambda V$, and the eigenstates and eigenvalues are expanded as a power series instead of a Taylor series. Notwithstanding that, the principles remain the same.

Not the answer you're looking for? Browse other questions tagged inorganic-chemistry physical-chemistry symmetry group-theory or ask your own question.

31
What is the molecular structure of xenon hexafluoride?
22
Why is the inversion barrier larger in PH3 than it is in NH3?
23
Cyclobutadiene - Jahn–Teller effect or not?
10
How do I find the ground state term symbol for transition metal complexes?
6
How does the Jahn-Teller distortion result in both elongation and compression?