Why does 2-chloropropane's mass spectrum have a peak at 27?

I have noticed that all halogenoalkanes of the form 2-Xpropane seem to have a mass spec peak at 27, implying that a $\ce{C2H3+}$ ion is being formed.

Forming a $\ce{C2H3+}$ ion, however, would mean breaking three bonds and, given its abundance, that wouldn't make sense - especially in the case of 2-chloropropane where it has an abundance of 25.36 according to this website.

EDIT: You can also see this peak in the mass spectrum of 2-bromopropane, 2-iodopropane and 2-fluoropropane, but it is less pronounced.

EDIT 2: as pointed out by @PLD, it appears that other molecules of this form have peaks at 27 for a different reason to that of 2-chloropropane, so my previous edit is irrelevant. 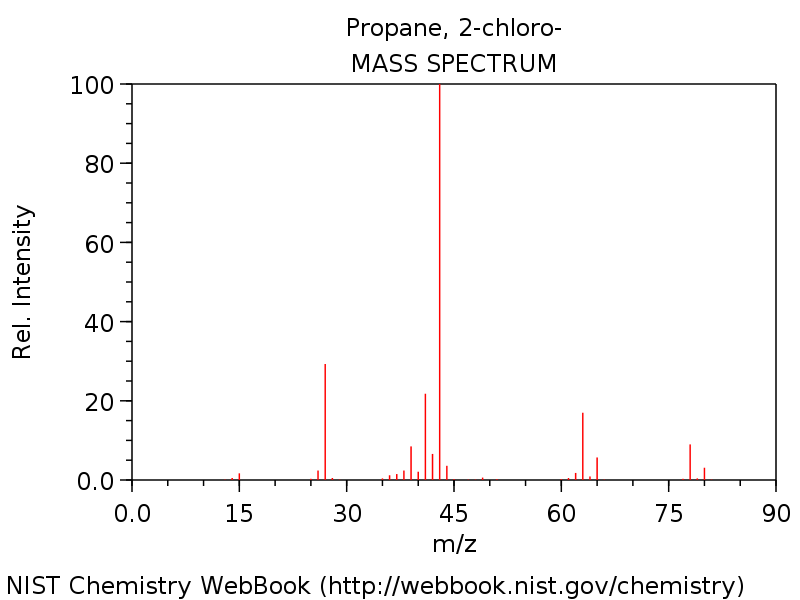 Here is a little mechanism I made up about it. Not quite sure if its correct, seems to fit the mass spectrum though.

Definitely have a look at McLafferty classical textbook. Maybe you will find the answer there.

Not the answer you're looking for? Browse other questions tagged organic-chemistry halides mass-spectrometry or ask your own question.