Do eta-4 benzene ligands participate in Diels Alder or other cycloadditions?

While refreshing myself on denticity to answer another question, I started to read about hapticity, which is the coordination of a ligand through multiple continuous atoms. A famous case is ferrocene (bis[$\eta^5$-cyclopentadienyl]iron, $\ce{Cp2Fe}$), where all five carbon atoms in each cyclopentadienyl ligand (Cp) are coordinated to the iron center.

Benzene can also be a polyhaptic ligand, forming $\eta^4$ or $\eta^6$ complexes depending on the oxidation state of the metal. In particular, bis(benzene)ruthenium complexes can undergo redox shuttling, where one benzene ligand switches between $\eta^4$ and $\eta^6$.

In the $\eta^4$ complex on the right, the top benzene ligand is now bent out of planarity, implying a break of aromaticity. This compound looks like a good dienophile for a Diels-Alder reaction. The article linked in the Wikipedia page on this switching phenomenon is published in Angewandte Chemie, International Edition, which is behind a paywall for me.

Does coordination of benzene to a metal in the $\eta^4$ mode activate it toward cycloadditions? Because of paywalls, I would appreciate summaries of articles in addition to links to them. My attempts to find articles using Google Scholar led me to articles about the construction of benzenes by metal mediated cycloadditions, and not to reactions of benzene itself.

Coordinated benzene as a dienophile

It would be logical to suggest that an η4-benzene ligand could behave as a dienophile. The reason why benzene is characteristically unreactive, both as a dienophile and as a diene, is because of its aromaticity; if aromaticity is lost, one would expect it to become more reactive.

However, to the best of my knowledge (and SciFinder-fu), such reactivity does not seem to have been achieved. :(

In the rest of this answer I'll try to summarise some of the research that is (somewhat) related to what you were asking about.

Benzene as a dienophile - in general

Benzene itself (and some substituted benzenes) can act as a dienophile under some conditions:

Coordinated benzene, but as a diene

In ref 4, Inagaki et al. also summarised the ways in which benzene has been activated towards Diels–Alder reactions:

Currently, there are only a limited number of options to activate benzene sufficiently, including coordination of a transition metal complex to benzene, naphthalene with small resonance energy and the use of benzene derivatives with a sterically induced strained geometry [...] (emphasis mine)

The only reference given for the bolded sentence is the same article that Klaus has linked in his answer.5 It describes the reaction of η2-benzene as a diene, with a hypothesis very similar to what you have written in the question:

In the proper coordination environment, both osmium and rhenium can form stable complexes with arenes in which only two of the six carbons are coordinated. Once complexed in a dihapto fashion, the uncoordinated portion of the arene more closely resembles a conjugated diene. We therefore hypothesized that the complexation should increase the propensity of arenes to undergo cycloaddition reactions.

In this reaction scheme taken from the paper, the carbons numbered 1 through 4 are acting as the diene component in a Diels–Alder reaction with N-methylmaleimide: 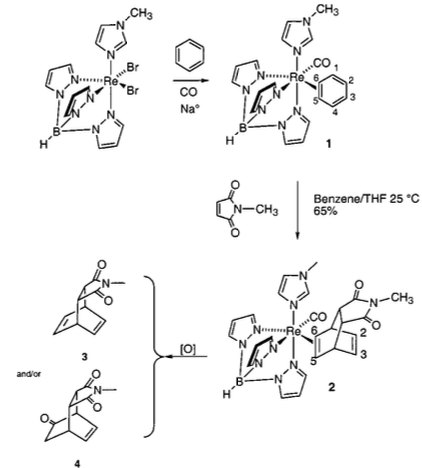 I'm definitely not an expert in organometallic chemistry, and I don't know which aspect ($\eta^{\mathbf{4}}$, any other hapticity, or benzene as a dienophile or diene) is more important for you.

Anyway, here's a JACS paper, which describes the the Diels-Alder reaction of N-methyl maleimide with an $\eta^2$-rhenium complex of benzene as the diene.

Not the answer you're looking for? Browse other questions tagged organic-chemistry organometallic-compounds pericyclic or ask your own question.