I'm a bit confused about electrochemical gradients of sodium and potassium ions. They have similar concentrations and are kind of similar ions but their distribution is different across the membrane. If that is true why they cross membrane. Why don't these gradients somehow cancel out? Why is there even need for sodium to enter the cytosol when potassium ions which are also positive are already inside?

In order to understand why this happens, you have to recall the permeability characteristics of the plasma membrane. It seems that the movement of ions to and fro the cystol is counterproductive however this is not so. Actually there is unequal distribution of ions in the extracellular fluid and cytosol

Extracellular fluid is rich in Na+ and chloride ions (Cl–). In cytosol, however, the main cation is K+, and the two dominant anions are phosphates attached to molecules, such as the three phosphates in ATP, and amino acids in proteins.

Differences in intracellular and extracellular concentrations of ions result primarily from: 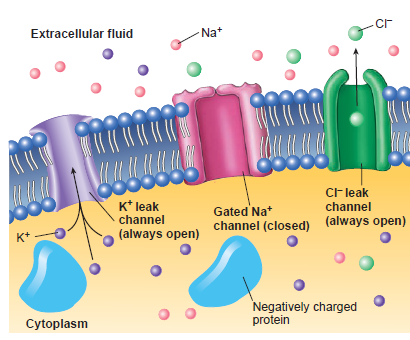 These channels open and close in response to small voltage changes across the plasma membrane. The movement of ions into or out of the cell changes the charge difference across the plasma. membrane, which causes voltage-gated ion channels to open or close. Voltage-gated channels specific for Na+ and K + are most numerous in electrically excitable tissues

In summary it is important to note, there is uneven distribution of ions in and outside the cytosol. Because the plasma membrane has more K+ leak channels than Na+ leak channels, the number of K+ ions that leave the cell is greater than the number of Na+ ions that enter the cell. As more and more K+ ions leave the cell, the inside of the membrane becomes increasingly negative and the outside of the membrane becomes increasingly positive. The inability of most anions to leave the cell also contributes to the negativity of the resting membrane potential. These trapped anions cannot follow K+ out of the cell because they are attached to non-diffusible molecules such as ATP and large proteins.

Nevertheless, sodium ions do slowly diffuse inward, down their concentration gradient. If not controlled, such inward leakage of Na+ would eventually destroy the resting membrane potential. The small inward Na+ leak and outward K+ leak are offset by the Na+/K+ ATPases (sodium pump)

This diffusion accross the plasma membrane is necessary because:

2
Why don't ions have one equilibrium potential? (Nernst equation)
8
Diffusion and potential gradients for two similar atoms
21
Why is the magnesium(II) ion preferred over other ions in chlorophyll?
22
Pi electron stacking, how does it work?