Why is ice less dense than water?

water phase hydrogen-bond
Share
Improve this question
edited May 1 '17 at 10:19

The following is an image of the hexagonal crystaline form of ordinary ice (Ice I$_h$) taken from S.S. Zumdahl, Chemistry, 3rd ed., copyright © 1993 by D.C. Heath and Company: 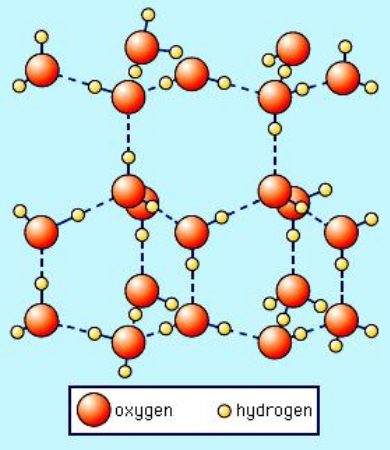 As an addition to the other answers, note that the "honeycomb" structure that is responsible for the lowered density upon freezing is not sacrosanct. It can be collapsed, without melting, by high pressure starting at about 200 MPa. These are the high pressure ice phases, about a dozen of which are known. All those in equilibrium with the liquid, apart from the low pressure Ice $I_h$ phase, are more dense than the liquid with which they are in equibrium; so the melting point of water starts rising once we get to the threshold of Ice $III$ at about -22°C and 210 MPa.

We can also go the other way, generating ice structures even more open and lower in density than Ice $I_h$. Such phases are not realized in pure water but appear in clathrates such as the well known methane clathrate.

Not the answer you're looking for? Browse other questions tagged water phase hydrogen-bond or ask your own question.

20
Why does HCN boil at a higher temperature than NH3?
7
Why does ice freeze the way it does?
5
How does ice melt?
2
Does clay absorb water because of polarity?
3
Why is the boiling point of water and ammonia so different?
21
Why is the boiling point of stibane higher than that of ammonia?
2
Hydrogen Bonding in Water Phase Changes
7
Why is density of water maximum at 4 degree celsius?
2
What is exposed in the surface tension of water?