In an octahedral complex, what happens to the electrons donated by the ligand?

I am trying to understand how complexes are coloured. After some reading, I found out this was due to the d-d splitting induced by the coordinate bonds of ligands to the central metal ion. The electrons in the d-orbitals then transition between each other, and absorb light in the process.

However, I do not understand what happens to the electrons donated by the ligand. Don't they form a sigma bond with the d-orbitals of the metal ion? In which case, wouldn't they go into the d-orbitals and 'fill it up', thus disallowing transitions?

Or is it the case that the d-orbitals of the central metal ion are not involved in the bonding at all?

This is a very good question, I must say. It requires the understanding of the very fundamentals.

But do they pair up? Think carefully. Recall one of the most basic assumptions of the Crystal Field Theory: The attraction between the ligand and the metal is assumed to be purely electrostatic in nature. This very important assumption is the sole reason for the explanation of colors of these complexes. As the ligands approach the metal atom, they create a crystal field. These fields tend to repel the electrons of the metal and increases their energy. A perfectly symmetric spherical crystal field would increase the energy level of all the orbitals equally and to the same level. But this isn't the case in actual coordination complexes. An octahedral crystal field would approach along the axes of the $d_{x^2+y^2}$ and $d_{z^2}$ and tend to repel them to a greater extent than the other orbitals ($d_{xy}$, $d_{yz}$, $d_{zx}$). This difference in energies of the orbitals is known as crystal field splitting. We can now group these orbitals into two groups, three low energy $t_{2g}$, and two high energy $e_g$ orbitals. 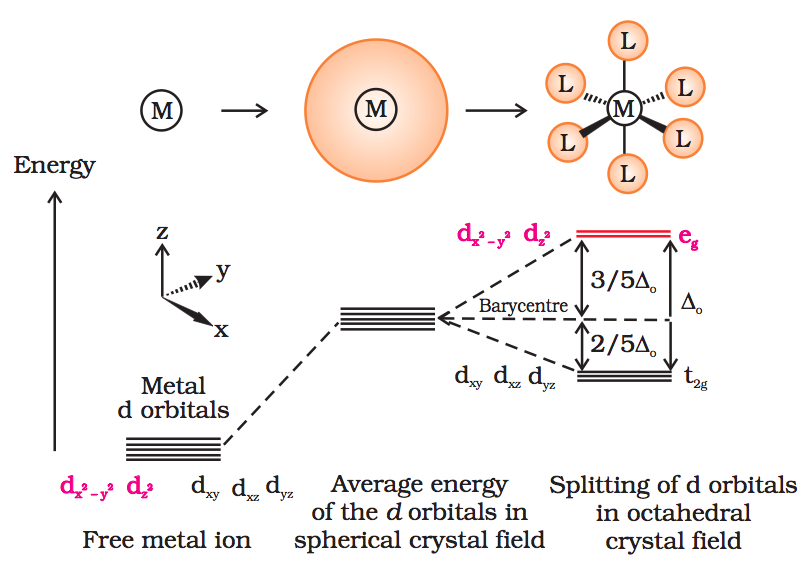 Keep in mind that the ligands do not pair with the electrons of the metal. They simply repel the orbitals electrostatically and increase their potential energy in the process.

So, now how do the complexes actually get their color then? When the orbitals split, the difference in their energies is called Crystal Field Stabilization Energy (CFSE) and is denoted by $\Delta_{\text{o}}$. When photons of light are incident on the complex, it absorbs the photons which possess the energy equal to that of the value of $\Delta _{\text{o}}$. From quantum theory of electromagnetic waves, it's known that the energy of a photon is given by:

Where $h$ is known as the Planck's Constant, with a value of $\pu{6.626×10^{-34}Js}$, and $\lambda$ is the wavelength of light. If the value of the wavelength lies in the visible light spectrum, you can find the color of the light absorbed by the complex.

How do you find the color emitted out? There's a very easy and fun way to find that out. Take a look at this color wheel: 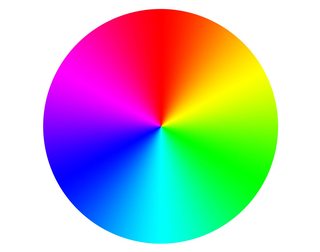 This is a brief discussion about the colors of complexes. Let me know if you need more clarification.

Ligand field theory (LFT from here on in) is a newer and more in-depth way of considering the bonding/properties of coordination complexes, and was developed by combining crystal field theory (CFT) with molecular orbital theory (MO theory). The major difference is that the ligands are no longer considered as electrostatic point charges.

LFT works by taking the orbitals on the metal centre (s, p, d) and mixing them with a set of (symmetry adapted group) orbitals which represent the ligands (doing this requires some treatment with group theory). The process of doing this is a question in itself (and has been discussed on chem.SE previously), but what we really care about right now is the results obtained from the ligand field approach.

With LFT, the resulting diagram differs depending on the type of ligands involved (in CFT, there is an octahedral crystal field which is largely the same, irrespective of the ligand type, since all ligands are considered as point charges).

What remains the same is that we still end up with an eg MO and a t2g MO, its just that the orbitals used to obtain those are different depending on the ligand. 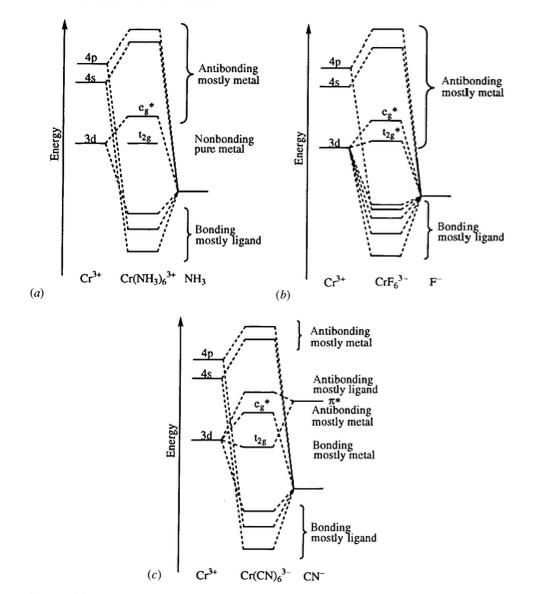 Once we have our ligand field diagrams, we simply have to fill with electrons (taking into account the metal and the ligands). If you go through and do this, you should end up with a diagram such as that in figure 2. 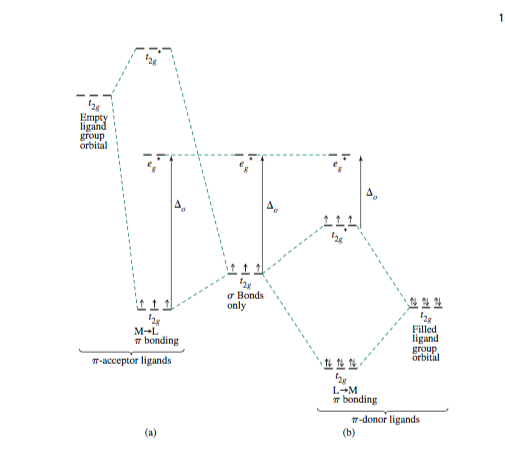 From CFT, you still would have gotten to the fact that the t2g orbital ends up filled with 3 electrons in both cases. What differs (and where the power in LFT lies) is that we can now see where these electrons come from (i.e. the contributions).

0
Do Ligands electrons fill the d-orbitals of the metal ion?

2
Which d-orbital configurations form an octahedral complex?
4
What accounts for the high spin state of the complex Tris(acetylacetonato)iron(III)?
3
How does complex ion differ from ligand complex?
1
About Fe(III) and Fe(II) coordination complexes
2
Crystal field splitting of other orbitals