I read somewhere that Fe does not react with formic acid. Because carboxylic acids are very weak. But by searching I found an article about carboxylate on wiki. It mentions about carboxylate metal salts. So, is there carboxylate of Iron? What is its chemical formula and how is it prepared?

Iron(II) acetate is an coordination complex with formula $\ce{Fe(CH3COO)2}$. It is a white solid, although impure samples can be slightly colored. A light green tetrahydrate is also known, which is highly soluble in water.

Iron powder reacts with hot acetic acid to give the product.

Actually It is not a salt. It adopts a polymeric structure with octahedral Fe(II) centers bridged by acetate ligands.

Ferric acetate is the coordination compound more commonly known as basic iron acetate. With the formula $\ce{[Fe3O(OAc)6(H2O)3]OAc}$ where $\ce{OAc− = CH3COO−}$, it is a salt, composed of the cation $\ce{[Fe3(μ3-O)(OAc)6(H2O)3]+}$ and an acetate anion. The formation of the red-brown complex has long been used as a test for ferric ions. 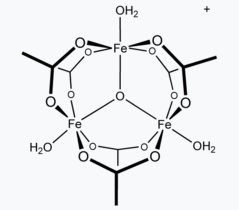 Early work showed that it is trinuclear. The Fe centres are equivalent, each being octahedral, being bound to six oxygen ligands, including a triply bridging oxide at the center of the equilateral triangle. The compound was an early example of a molecular compound of iron that features an oxide ligand. Ignoring its 24 hydrogen centres, the cation has D3h symmetry.

Prepared by the double decomposition reaction between ferrous sulfate and sodium formate in presence of an acid. 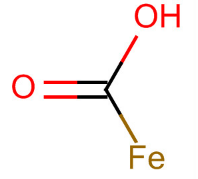 2
Are there any safety guidelines for mixing sulfate with chloride?
4
pH of sodium metasilicate anhydrous vs pentahydrate when dissolved in water
12
How is volatility useful in the production of acids?
27
What metals aren't dissolved in/attacked by aqua regia?
5
Reaction between magnesium metal and sodium hydroxide: Does this even happen?
2
Is dissolution of H2S in water exothermic?
4
Fractional index in a chemical formula of metal oxide