This is quite an interesting situation I had thought of. Consider two beakers, each containing $\pu{180 g}$ of water. Also, suppose one of the two has $\pu{1.8 g}$ of glucose dissolved in it. Let's call the one without glucose as A, and the one with glucose as B. I keep a small bell-jar that is large enough to just cover both of the two vessels. Now I will try to measure the vapor pressure inside the jar. Here's a little diagram to show what I mean: 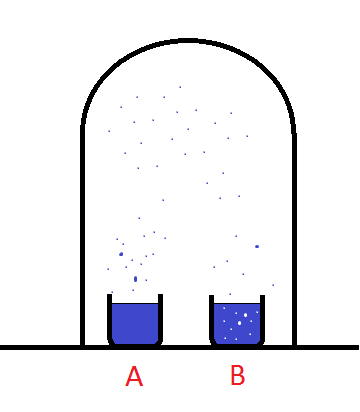 I do not have access to bell-jars or manometers so I'll try to use Raoult's law to find the vapor pressure inside the vessel. The law in a simplified way would be:

Now, both of the values can't be true at the same time, and that's what I believe is the paradox.

How can this paradox be resolved?

What are your thoughts? Does the paradox ever resolve or does it remain in an unbalanced situation?

Although "paradox" is not quite the right term, what you have discussed is actually a simple, yet interesting and important phenomenon.

Your post suggests (in fact, requires) you believe that Raoult's Law is accurate to 0.5%. It is not. Quantum Mechanics, the foundation of modern chemical theory, was created/discovered in the 1920s, Raoult's Law in the 19th Century. That's pretty good evidence that the law will be, at best, an approximation to the actual state of the system. As greg commented, you assume equilibrium - or at least, you should have understood that Raoult's Law requires equilibrium or near equilibrium. You are correct that since the two liquids have different vapor pressures, then equilibrium can not (yet) exist. The outcome would be (given an infinite amount of time, given a isolated system, given no bacteria nor oxidants present to consume the glucose, that the pure water (pure, right? no dissolved salts, but what about the dissolved air?) that the glucose solution would increase in mass & volume eventually overflowing its container. There are other considerations, which we ignore: surface tension and gravitational potential energy (adding more volume raises the height). One thing I learned fairly recently is that if you picture a cylinder of gas, the thermodynamics I learned in chemistry classes (including graduate level) and the thermodynamics I learned in freshman Physics, says that that cylinder (as a well insulated and closed system) will eventually attain thermal equilibrium. That is wrong. The temperature and density of the gas in the cylinder will depend on height. Thermal equilibrium will "never" be achieved.(although for a sufficiently "short" cylinder, the temperature and density gradient might be so small as to be impossible to measure.) ("never" meaning as long as the planet and cylinder exist. In the long run, the planet will most likely (we don't know for sure) be pulled into the Sun... but I digress...). Chemistry talks about many things, it is much more of a pragmatic science that Physics - which is more theoretical. (Although there may be more pragmatic physics used day-to-day than theoretical chemistry...) One way to divide chemical theory (there are many ways) is between Thermodynamics (equilibrium or near equilibrium) and Kinetics. I advise you always keep in mind whether a particular relationship or process or theory is thermodynamic (usually about energy, about path-independent initial and final states) or kinetics (about speed, shape, and specific process (path)).

Not the answer you're looking for? Browse other questions tagged physical-chemistry aqueous-solution gas-laws vapor-pressure or ask your own question.