Why don't elements having the same valency as Carbon bond so readily?

I haven't been in touch with Chemistry as a subject of study for several years now. Still- if I remember correctly, Si, Ge, Sn, Pb all have same number of electrons as Carbon in their outer orbits.

So why is Carbon so ubiquitous? I believe the number of electrons an element can give or accept decides how readily it bonds with other elements. For instance, inert gases have no room for extra electrons and hence, are inert.

So why don't other elements in the column of Carbon bond as easily? In other words, why aren't we made up of Pb primarily instead of C?

I remember asking this question to my high school chemistry teacher, but as far as I can remember, he wasn't able to give a satisfactory answer. Forgive me for asking this , if this question is too naive. But I genuinely wondered a lot about it back in my school days and still don't know the answer.

It's not that they don't bond readily, it's that they can't form as stable of networks as carbon. Carbon has many different allotropes, while silicon has only a few. As you can see, carbon forms uniform hexagonal sheets with massive $\pi$ systems as in graphene and many of its other allotropes, while silicene is incapable of remaining flat and is bumpy. This is a result of the bond distances and p-orbital overlap.

As you can see, as the atoms get larger, the bond length increases. $\pi$ bonding is completely reliant on the overlap of adjacent p-orbitals, so the farther away these orbitals are, the weaker the bonds. 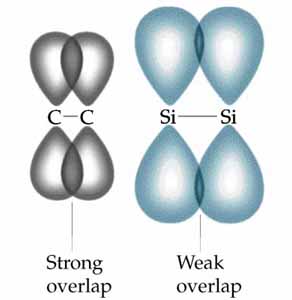 Bond dissociation enthalpy also increases with atom size. This leads to an overall decrease in the stability of larger silicon or germanium compounds. Tin and lead are metals, which have much different chemistry altogether on account of their electronegativity and occupied d-orbitals, in addition to their size.

Not the answer you're looking for? Browse other questions tagged periodic-trends periodic-table hydrocarbons or ask your own question.

3
Why are elements on the right side of the periodic table nonmetallic and gas at room temperature?
4
What is an 'acidic' oxide?
3
In the periodic table, why doesn't the 2nd row have exactly 2 elements?
1
Atomization enthalpies of transition elements
3
Why group 13 elements don't show +2 as their major oxidation state?
0
What is the 3D shape of an ethane molecule?