When finding ions which correspond to certain fragments on a mass spectrum; there are multiple possible ions that can correspond to the same fragment; How should I know which one is the correct one?

Generally speaking: knowing the history of your sample (e.g. earlier steps of synthesis allowing / excluding elements that could numerically fit into the list of suggested fragments) and additional spectroscopic characterisation (UV-Vis, IR, Raman, NMR, etc.) may be helpful.

The problem you describe may be attenuated by using a mass spectrometer of higher resolving power. Instead of submitting the sample to the detector behind a smaller LC-MS coupled analysis, providing a purified sample to a larger, tuneable sector mass spectrometer, for example.

An important alternative is coupling of several mass spectrometers along one line, where after initial ionisation primary fragments are separated from each other, and their corresponding subsequently generated daughter fragments are eventually characterised, like in a tandem MS/MS: 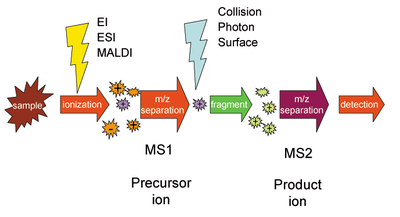 An overview about the later provides this wikipedia entry.

Not the answer you're looking for? Browse other questions tagged analytical-chemistry mass-spectrometry or ask your own question.

15
Understanding how mass spectroscopy works
2
How to interpret a MALDI mass spectrum?
3
Interpretation of the following mass spectrum
4
How to find the mass spectrum of Cl3+?
2
Pentabromophenol Mass Spectrum
3
Fragmentations and rearrangements in n-(4-alkyl phenyl) alkanoic acids in mass spectrometry
6
Difference between HCD and CID collision induced dissociations?