Reaction of potassium cyanide with 2-(chloromethyl)furan

What would the mechanism for the reaction between 2-(chloromethyl)furan and potassium cyanide be, as detailed below?

I know that for 6-membered rings like pyridine, a $\mathrm{S_NAr}$ reaction can occur. However, I'm not sure as to how the mechanism differs between the two in a way that the cyanide group is added at the 5-position instead of the methyl group.

Although the answer was already appropriately provided, for anyone interested in further reading, the reaction is covered in detail by Divald and coworkers:1 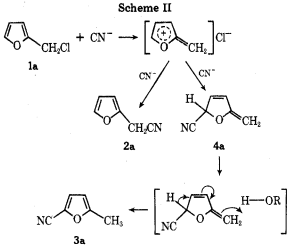 Essentially, the proposed mechanism starts from the resonance structures of 2-chloromethyl furan, where the chlorine bond is treated as ionic and the electron-donating property of oxygen stabilizes the shared positive charge similar to a benzyl cation. The 5' position is therefore electrophilic (and is presumably further activated by the inductive effects of a neighboring oxygen), resulting in a 60/40 yield of 5/2-methyl substitution.

It is however mentioned early in the paper that 5' substitution is only seen in protic solvents. This could be explained in the proposed mechanism, where after addition to the 5' position, elimination of the geminal hydrogen and tautomerization proceed through exchange with a protic solvent.

I hope this makes sense. I have no access to a drawing package.

14
What's the mechanism of the reaction of (E)-methyl 3-(furan-2-yl)acrylate in acidic methanol?
15
Why use potassium iodide instead of copper iodide in Sandmeyer reaction?
3
Deciding E1/E2/SN1/SN2 for cyanide ion
11
Major product of a cyclopropanol with silver ions
3
Mechanism for the synthesis of 2-pyridone from pyridine N-oxide
27
The order of aromaticity of benzene, thiophene, pyrrole, furan, and pyridine
5
Is (2R,3S)-3,4-dimethylpentan-2-ol feasible to be dehydrated with POCl3 and pyridine?