How does the HCl-KCl Buffer work?

I have just been studying the $\ce{HCl}$-$\ce{KCl}$ 'buffer', but there are still quite a few things I am uncertain about. I would appreciate any help in clearing up some questions I have.

What I understand (possibly incorrectly) from my research so far:

Water is the weak acid acting as a buffer in this system. The $\ce{HCl}$ and $\ce{KCl}$ in the system are there to increase the solution's ionic strength, which somehow improves water's buffer capacity. In high ionic strength solutions, the 'standard' equilibrium equation has to be changed to include the activity coefficients. For water's equilibrium, as the ionic strength increases, the activity constants decrease and so the K value decreases.

If anything above is incorrect, please point out my misunderstanding. There are still a few questions I can't find answers to:

I'm finding this 'buffer' system to be extremely confusing, so any help answering these questions would be greatly appreciated.

that is, the relationship between concentration (in equivalents) of strong base ($c_\mathrm{b}$) or acid ($c_\mathrm{a}$) added to a solution and its change in $\mathrm{pH}$. From now on I'll assume we're adding a monoprotic base or acid, so "equivalents" and "moles" (and their concentrations) can be used interchangeably.

Pure water has a very low buffering capacity - its $\mathrm{pH}$ is very sensitive to the addition of acids or bases. For instance, imagine we add a concentration $c_\mathrm{b}$ of base to pure water:

The self-ionisation equilibrium of water will be displaced:

so, taking the derivative,

it's easy to show that, similarly, for the addition of acids,

and, combining the buffer effect of both semi-systems, we get the total buffer capacity of water: 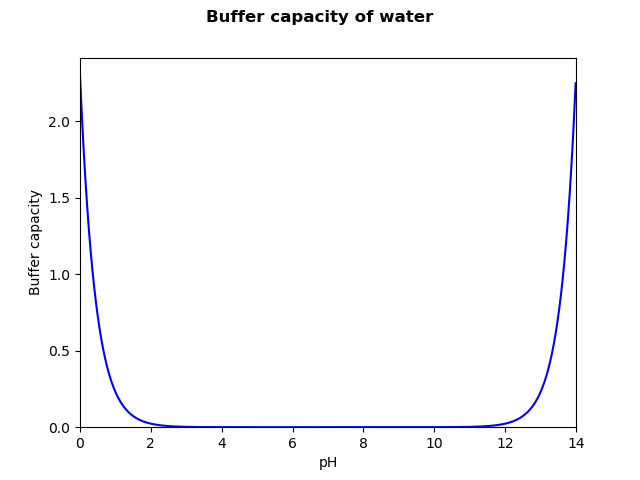 1:1 solutions of weak acids/bases are a typical buffer system around $\mathrm{pH}=\mathrm{p}K_\mathrm{a}$ for the buffer. To understand why, let's imagine we add a weak acid/base pair, $\ce{HA/KA}$, with total concentration $C_\mathrm{A}$, to which we later add a certain concentration of base, $c_\mathrm{b}$. This weak acid/base pair will be described by the equilibrium

So the buffer capacity of the solution will be:

Note that the first two terms are the buffer capacity of water, so the contribution of the acid/base pair is

Additive buffer capacity contributions can be calculated this way. 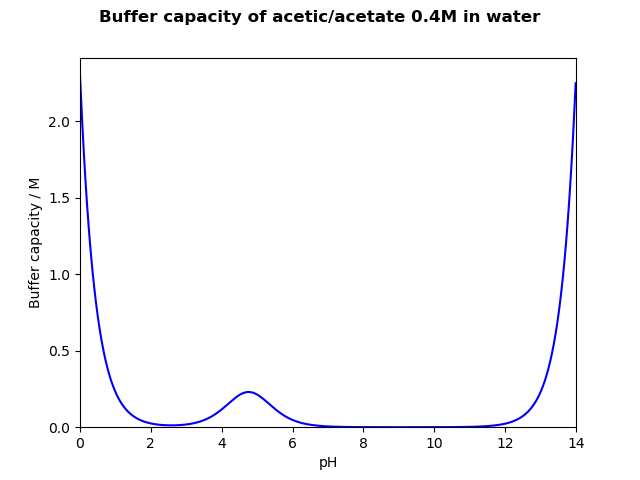 Since buffers are moderately concentrated electrolyte solutions, the assumption that activity coefficients in them are approx. 1 shouldn't be automatic. How does this affect the calculations of buffer capacity we've performed until now?

So reflecting the impact of ionic strength on buffer capacity becomes a question of evaluating $K'_\mathrm{A}$ and using it to replace $K_\mathrm{A}$ in our previous expressions. For instance, we can use the Debye-Hückel relationship:

A similar correction can be applied to $K_\mathrm{w}$ to obtain $K'_\mathrm{w}$. 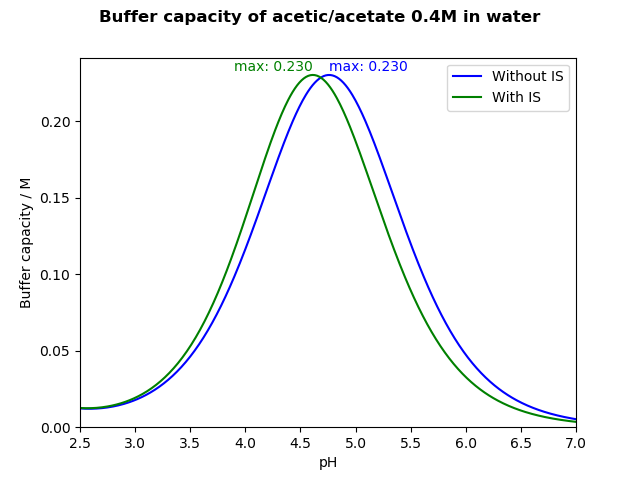 So what about the $\ce{HCl/KCl}$ buffer? Unlike the example of acetic/acetate, $\ce{HCl}$ is a strong electrolyte - so it dissociates completely at all values of $\mathrm{pH}$. So we can treat it in two ways: as simply a water buffer with a different starting $\mathrm{pH}$, or as an acid/base conjugate pair buffer with a $\mathrm{p}K_\mathrm{A} < 0$. Both are equivalent, as the acid/base contribution is negligible compared to the water contribution due to the $\mathrm{p}K_\mathrm{A}$ value.

So, for all effects and purposes we have a buffer that behaves just like water. It is, however, a buffer that behaves just like water in a region of the $\mathrm{pH}$ scale which has a relatively large buffer capacity by virtue of being close to $\mathrm{pH}=0$. For instance, this is what buffer capacity looks like around our typical $\ce{HCl}\ 0.2\mathrm{M}$, $\ce{KCl}\ 0.2\mathrm{M}$ buffer (the red dashed line marks the initial $\mathrm{pH}$): 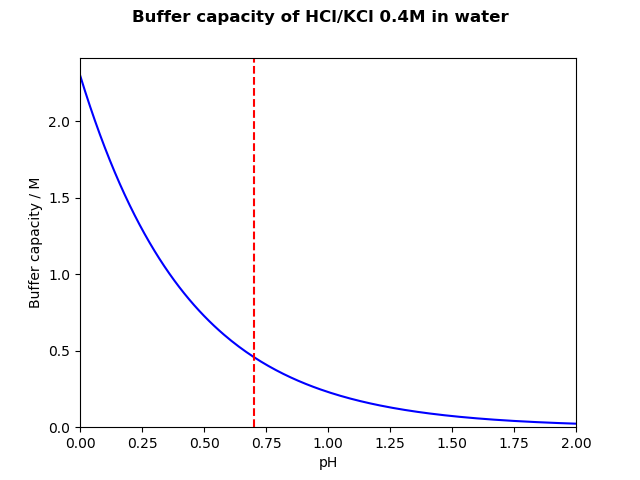 Note also that, unlike in weak acid/base pairs, we cannot simply increase concentration to increase buffer capacity while retaining the same $\mathrm{pH}$ - as the concentration-dependent term, corresponding to the $\ce{HCl/KCl}$ base, is negligible. Ionic strength is irrelevant for $\beta$, as well, as $K'_\mathrm{w}$ and $K'_\mathrm{A}$ is not involved - $\beta_{\ce{H3O+}}$ is the only relevant contribution to $\beta$ in this very acidic region, and, by definition, it is not affected by activity concerns (unlike $\beta_{\ce{OH-}}$ or $\beta_{\ce{HCl/Cl-}}$). 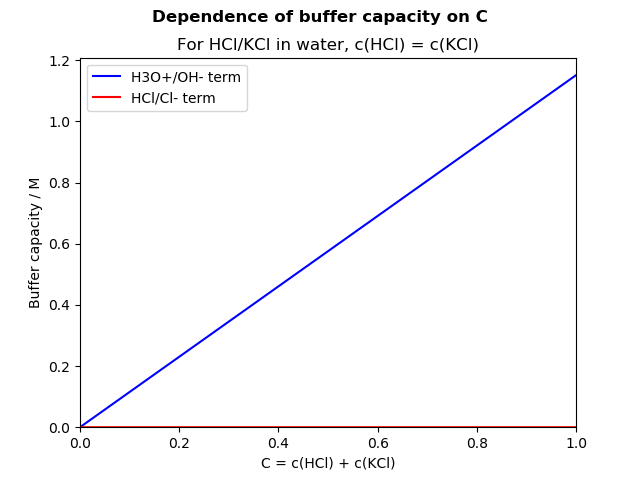 Conversely, what if we control for $\mathrm{pH}$ and change only $I$? Let's imagine a series of solutions containing a fixed concentration of $\ce{HCl}$ and varying amounts of a non-reacting, strong electrolyte without common ions - such as $\ce{NaBr}$ - so we can change the ionic strength of the solution without affecting neither the $\mathrm{pH}$ nor the $\ce{HCl/Cl-}$ equilibrium. The impact of $I$ on $\beta$ would look like this (note that the minimum $I$ corresponds to a solution with $\ce{HCl}$ and no $\ce{NaBr}$): 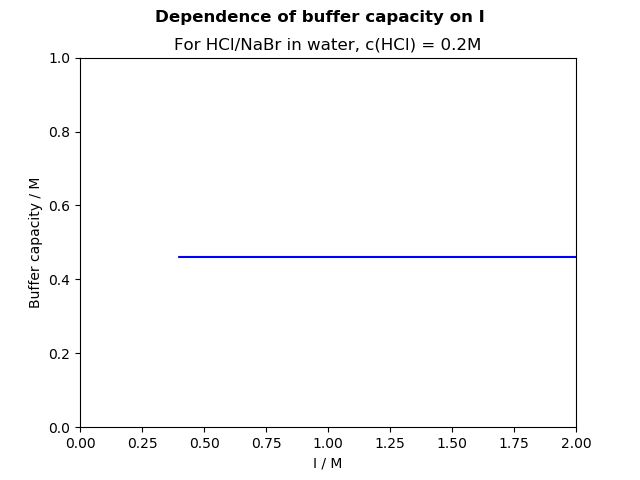 So, after this discussion, we can now directly respond to your questions.

1) Why does the increased ionic strength of the solution improve water's buffer capacity?

It doesn't. The buffer capacity of solutions of strong acids are dominated by the $\beta_{\ce{H3O+}}$ term, which (by definition of $\mathrm{pH}$) is not affected by ionic strength.

There are, however, other reasons to desire an ionic strength in that range - in biological systems, many molecules, particularly proteins, have a privileged ionic strength stability gap - above or below which they tend to denaturalise or precipitate, and outside of which their biological activity can be inhibited or poisoned. Although different systems will require different ionic strengths, buffers are typically prepared with ionic strengths in the range $0.1-1\mathrm{M}$ for that reason.

2) Isn't a higher equilibrium constant required to make water a better buffer? Then isn't it bad that the ionic strength decreases $K$?

3) Could any other salt have been used to increase the ionic strength, or is there some specific reason $\ce{HCl-KCl}$ is used?

Yes, any other salt could have been used to increase the ionic strength. Adding $\ce{KCl}$ affects the acid-base pair contribution to $\beta$, but as we've seen, that contribution is completely negligible - as will be the case with strong acids, which operate mainly through the $\ce{H3O+}$ contribution.

Not the answer you're looking for? Browse other questions tagged acid-base reaction-mechanism aqueous-solution ions or ask your own question.

2
Are the best buffers those that are in a 1:1 ratio with its conjugate acid/base?

9
Questions about Buffer System (Lab)
6
Determining (approximately) the amount of a strong base needed to change a buffer's pH by a certain number of units
11
Does the mass of sulfur really decrease when dissolved in water and increase when burnt?
1
Am I limited by the pKa value of an weak acid when preparing a buffer solution of it (and its salt)?
1
How to Prepare a Buffer Solution?
2
How to rationalise the drop in pH when excess aluminium nitrate is added into an aqueous ammonium solution?