This is one of the questions used in the Russian State Chemistry Exam. One needs to select the set of chemicals in the second column such that each of them would react with the element or chemical in the the first column.

I mean, it should react with each element in the set in order for that set to be suitable. 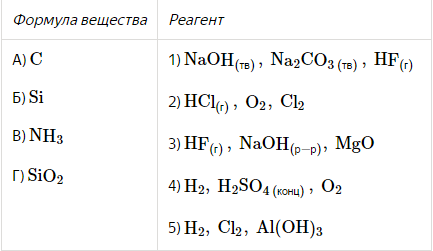 It seems to me that $\ce{Si}$ has no suitable set among those five.

I used Chemguide and a Russian school curriculum-based website to refresh my memory of $\ce{Si}$ activity.

Am I wrong in regard of any of the five chemicals? Maybe it will react with $\ce{MgO}$, for instance?

Maybe it also react with the chemicals from set 2.

Silicon react with hydrogen chloride to produce trichlorosilane and hydrogen. This reaction takes place at a temperature near 350°C. In this reaction, the catalyst is can be copper.(chemiday 1)

Silicon react with oxygen to produce silicon dioxide. This reaction takes place at a temperature of 1200-1300°C.(chemiday 2)

Silicon react with chlorine to produce silicon(IV) chloride. This reaction takes place at a temperature of 340-420°C, in a flow argon.(chemiday 3)

Maybe you doubted the reaction between silicon and hydrogen chloride.

Not the answer you're looking for? Browse other questions tagged inorganic-chemistry reactivity or ask your own question.