Which steps are most critical in driving glycolysis foward?

I'm assuming that the non-reversible steps (1,3,10 on the chart below) in glycolysis are the most critical in driving it forward, but I have a feeling it might be something else. If so, why are they the most critical?

I've been using this chart as a reference.

The second half of my question is how mass-action ratio (Q) affects these reactions.

Those steps you mentioned are not merely critical steps, in glycolysis but are however the control points of the process and I would prefer to call them rate controlling steps. There is nevertheless one critical step which is believed to be the first committed step in glycolysis (not really sure if there are more).

Having said that, there are factors whih affect the process of glycolysis:

The enzyme that catalyses the first reaction is hexokinase. The substrate of hexokinase is not necessarily glucose; rather, it can be any one of a number of hexoses, such as glucose, fructose, and mannose. Glucose-6-phosphate inhibits the activity of hexokinase; this is a control point in the pathway. Hexokinase is inhibited by high levels of its product, glucose-6-phosphate. When glycolysis is inhibited through phosphofructokinase, glucose-6-phosphate builds up, shutting down hexokinase. (However, the liver contains a second enzyme that phosphorylates glucose-glucokinase).

The final step of glycolysis is also a major control point in glucose metabolism. Pyruvate kinase (PK) is allosterically affected by several compounds. ATP and alanine both inhibit it. (It would be wasteful to breakdown more glucose is there is already vast amounts of ATP). Alanine is essentially pyruvate with an amino group. (converted to pyruvate via a transaminase enzyme). Therefore, a high level of alanine indicates that a high level of pyruvate is already present, so the enzyme that would make more pyruvate can be shut down. Fructose-1,6-bisphosphate allosterically activates pyruvate kinase so that the incoming products of the first reactions of glycolysis can be processed.

It is frequently observed that control is exercised near the start and end of a pathway, as well as at points involving key intermediates such as fructose-1,6-bisphosphate. This is the summarised version of control factors of glycolysis: 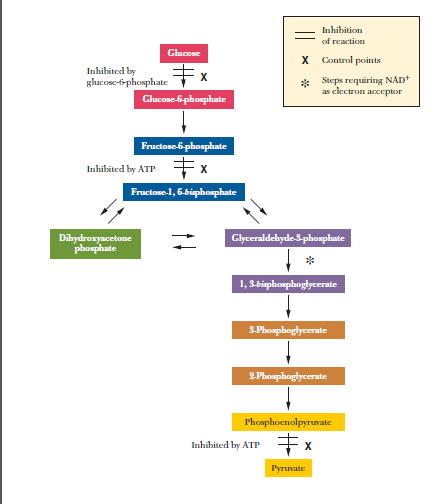 To sum up, the reason I explained your mentioned reactions not to be critical is because (with reference to reaction 1 and 3):

So these are major controlling steps, meaning glycolysis can still take place (if committed step is reached) though at reduced rates until optimum conditions are restored. The second part of your question can’t not answer it because it is a different concept. Hope this helps

The committed enzyme in glycolysis is considered to be PFK-1, and is under complex control. While the hexokinase/glucokinase steps are of course critical for getting glucose into the cell, the product, glucose 6-phosphate has multiple fates (on to glycogen or the pentose pathway), so is not unique to the glycolytic pathway.

In muscle, the key activator of PFK-1 is AMP, signalling a drop in the energy charge of the cell and therefore a need to switch on ATP generating pathways. In the liver, the key activator is Fructose 2,6 bisphosphate, which rises in response to insulin.

2
Are there ways to predict which chemicals will kill certain bacteria?
1
Are phosphomonoesterases solid?
10
How can enzyme/substrate reactions that adhere (largely) to quantum theory also require 'Newtonian' consideration of gravity?
1
Which atoms in a given amino acid are able to form hydrogen bonds with water?
1
Which coloring agents are responsible for the color in red tea and yellow tea?
0
Is there a pH at which all proteins are negatively charged? How can it be determined?
5
Are there proteins with permanently bound magnesium?
0
Why are some ions mutagenic and others are not?