In NaCl there is a simple cubic unit cell and the coordination number is 6. So i am confused how are both the ions arranged in such a lattice, with such a cordination no as in simple cubic unit cell there are 8 atoms on the edge of a cube with a contribution of 1/8 by each of them to each unit cell. Also how does it manage to have itself satisfied its valency in such a way to have a chemical formula of NaCl. 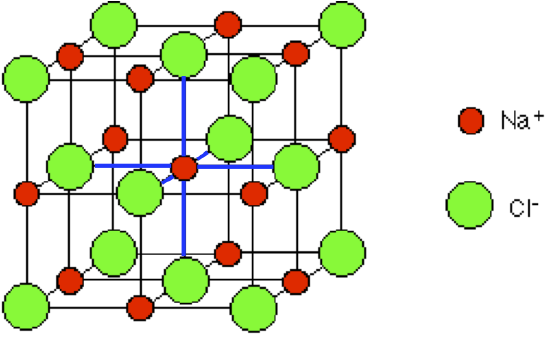 Recall that ionic solids are held together by electrostatic forces. So what matters is that the charges in a unit cell cancel. In other words, we want the net charge to be 0. Let's count the number of sodium atoms and chloride atoms to see whether the charges cancel in this unit cell.

So we can see that the overall charge for the top layer is 0. The same is true for the plane in the middle. Work through it. It is a good exercise.

11
Confusion in unit cells of crystal system
13
How does the crystal know where to stop stacking the unit cells?
3
Rock salt structure: chloride lattice or sodium lattice?
3
Oxidation state of metal ion in unit cell
2
How to determine the edge length of the aluminium unit cell?
11
Contribution of Tetrahedral and Octahedral voids in HCP
10
Software for generating a lattice from a unit cell for molecular crystals?
1
Does a unit cell have to contain a whole number of atoms?