Difference between Side Chains and Functional Groups

From what I've read, a functional group seems to be a specific case of a side chain, but this group must be directly responsible for some of the chemical characteristics of the molecule. However, in some cases, methyl groups (such as R-CH3) are listed as functional groups as well. For example, I have the following question: 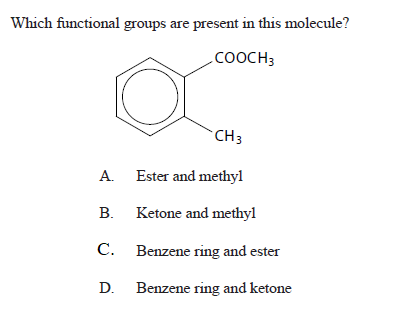 The correct answer is listed as C - but isn't the methyl a site of reactivity as well?

So the example you present is of a poor question. It's a classic case of a "best answer" MCQ that requires you pick the answer that is most accurate, rather than an answer that is unambiguously right. (I hate these.) Alkanes are listed in most textbooks and guides to organic chemistry as a "functional group." The reality is that it's hard to do chemistry on an alkane in most circumstances, so it's probably the least "functional" of the functional groups.

That said a side chain is an imprecise term. It's most consistently used in amino acid chemistry to refer to the differentiating moiety. But it's really used to indicate any moiety that hangs off of a common structure. What constitutes the side chain versus the primary structure is a function of context. A large polymeric structure can have side chains that consist of aromatic rings, while with a smaller structure consisting of a single benzene ring with some alkanes hanging off of it, the alkanes will be considered the "side chain." There's no substantive difference between a side chain and a functional group except for emphasis in a discussion.