What should be the correct sequence of reagents to be used in this reaction?

The correct sequence of reagents for the following conversion will be 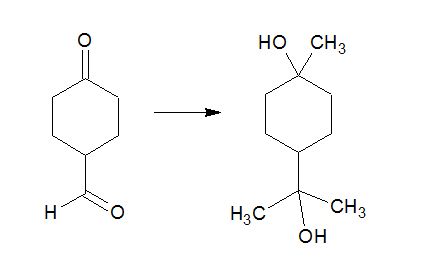 The first step is definitely the oxidation of the $\ce{-CHO}$ group to $\ce{-COOH}$ using Tollen's reagent. But I think that the second step should be to use Grignard reagent to form tertiary alcohol and then acidify it. Because if we first acidify and then use Grignard reagent, the $\ce{CH3MgBr}$ will react with the leftover acid and the $\ce{CH3OH}$ due to its mildly acidic proton.

Also, I am rather doubtful that the $\ce{CH3MgBr}$ will even react with the acid formed in the first step since it will be in the form of $\ce{R-COO^-Ag+}$, which is not electrophilic.

So what is the correct answer? And how would the $\ce{CH3MgBr}$ react with the acid? Thank you.

Browse other questions tagged organic-chemistry carbonyl-compounds or ask your own question.

3
What route to take in converting ethanol to crotonic acid?
1
What is true about this reaction involving hydroxy carboxlic acid?
0
What are the products of the Grignard reaction with methyl-magnesium iodide?
2
How to synthesise 2-aminoethyl benzene
5
Mechanism of Fisher esterification: Does the carboxylic acid gives off OH- or H+?
1
What are the products of the reaction of methoxypropane with HBr?
0
Carbonation of Grignard reagent with a carbonyl group present in it
4
Grignard reagent with sulfur dioxide
4
What is the product of reaction between 3,3-dimethyl butanal and SeO2 followed by conc. OH- ions?